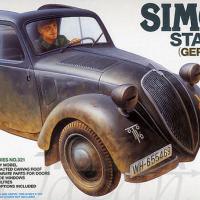 In a surprise offering, one of Tamiya’s newest models is the Simca 5 Staff Car (German Army). Henri Theodore Pigozzi, an Italian-born Frenchman, founded a car company that had a close relationship to Fiat. The Simca 5 was the French version of the best seller, the Fiat 500. Production figures (65,000 manufactured from 1936 until the fall of France), indicate that this was a very popular car. Once French industry was absorbed by the German war machine, small scale production continued until 1944. In typical German fashion, given their dearth of staff cars, the Wehrmacht adapted many of these diminutive automobiles as staff cars.

The kit has only three sprues, composing fifty parts. One sprue of clear parts features both open and closed passenger windows. There are markings for three vehicles, two German and one French civilian vehicle. As we have come to expect from Tamiya kits, the parts are free from flash and well made. Beware, though. Some of the parts that make up the suspension are very fragile, so handle with care. Also, there are many small parts as well. The carpet monster will like this kit.

Even though this is 1/35th scale, it is a tiny car, the Smart Car of its age. Even though this was molded in 1/35 scale, given its size, it feels like a 1/72 kit. The Simca kit is well engineered and assembly is straightforward. Tamiya military vehicle kits are fairly straightforward and assembly begins with the under carriage. The only issue that I had was with the bar that connects the steering wheel with the axle. Even though there is an inset in the instructions showing how the two ends are glued to the axle, I didn’t get it right and broke the piece when I attempted to re-glue it. The steering wheel also is a bit wonky. I followed the directions, but the steering wheel shaft bent after I installed the body. Pay attention to the directions!

Once the undercarriage is assembled, there really isn’t much else to do before gluing the entire vehicle together. The interior has seats and a dashboard and that’s about it. There are three small decals that go on the dash, so make sure those are affixed before gluing the dash to the car. As with all vehicles, I painted the inside before gluing the two halves together. The rest of the kit goes together rather easily. Tamiya gives you a choice of the side windows being open or closed and the headlights can have either a blackout cover or a full-on light. The doors took some time to get aligned, but once in, it was a nice, tight fit.

Tamiya gives you a choice of two Wehrmacht vehicles or a civilian vehicle with a black exterior finish. As with all Tamiya decals, they are thick but go on well. I chose one of the Wehrmacht versions. It was painted with German Grey (XF-63) and treated to a gloss coat of Future before the decals were put on. There are license numbers and tactical markings for the Third Infantry Division. I gave the car a slight wash of black to bring out the radiator grill and vents on the hood. Finally, I finished off with a light dust coat.

This is a small kit. I have included a comparison photograph with the Tamiya French Citroen staff car from several years ago. You can really appreciate just how small this vehicle is. My thanks to IPMS/USA and Tamiya USA for giving me the opportunity to review this kit.