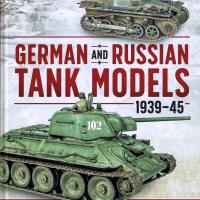 The author of this tome, Mario Eens, is well known to those on the international modeling scene as an award winner at European model shows, together with being a regular contributor to the excellent French modeling magazine, Steelmasters. The book itself consists of a master class in building, painting and finishing scale models, divided into five chapters, and spanning 128 pages measuring 8” x 10”.

Despite the title stating the contests are about tank models, one of the five subjects is a figure. I also find the subject choices rather scattered in nature. The German subjects didn’t see action in Russia, which I thought might have been the theme of the book just looking at the title, and the subjects are a mixed bag when it comes to scales. Three of the five chapters cover 1/35th subjects, while the other two are 1/72nd and 1/48th. My experience with most modelers is that they stick to one scale? Be this as it may, what do we get for our money with this book?

Mr Eens takes each subject, and begins showing the reader a list of what kit he started with, plus any and all aftermarket detail sets he utilized to enhance the base kit. He goes into great detail, both via the written word, and with well laid out color photographs, as to how he built and detailed the kit, painted the subject, applied the markings (if a vehicle), and how he weathered the model. The opening chapter, on building a 1/35th scale Panzer 1 Ausf. A from the North African campaign, consists of thirty-four pages, containing just shy of 200 color photos. Detail indeed!!

The second subject in the book is a curious one, in that the base kit, or kits, are ancient Tamiya offerings, to produce a 1/35th scale Russian T-34/76 “ChTZ” with the stamped turret shell. Some of the Tamiya parts are from a kit that was first released in 1975, and the project as a whole involves utilizing parts from THREE different Tamiya T-34’s. Surely a modeler would utilize the superb Dragon Models kit of this very subject? The Dragon option requires you to utilize one rather than three kits, and is more accurate and better detailed than the Tamiya kits. Be this as it may, the author does a spectacular job with the ancient kits once again detailing his build with masses of excellent photos, and showing his painting and weathering techniques to great effect.

The third subject covered is a fictious subject, the Panzer VIII Maus, “Germany 1946”. And in 1/72nd scale. While the author does an excellent job tackling this build, I have to wonder how many of those interested in the first two subjects, in 1/35th, will have any interest in the 1/72nd scale item? The same goes for the fourth subject, a Russian SU-152, in 1/48th scale. Is there much crossover when it comes to scale choice within the armor modeling community? For the sake of learning yet more superb techniques in building and finishing model kits, I hope so, for the third and fourth chapters in this book are equal in depth of presentation as the first two.

Finally, we get to the fifth subject in the book, and this is on a 1/35th scale Russian infantry man, titled “Berlin, April 1945”. It is the shortest of the chapters, at 12 pages. I DO believe this will be of interest to armor modelers of any scale, given that I myself together with a group of my armor modeling pals have been contemplating taking up adding figures to our armored vehicles, in an effort to better convey scale size. Without figures next to, on top of, or poking out of your scale military vehicle, it can often be difficult to figure out how large, or small, a vehicle actually is, I think you would agree. But put say a soldier standing next to a WW2 Japanese Type 94 tankette, and you instantly realize how small the vehicle was in real life. The same with a similar figure next to a German “Maus” heavy tank: there is no mistaking the massive size of the vehicle!

The author admits to struggling with figure painting (not his specialty), which I actually found refreshing, and such admissions actually encourage novices like me in that they make me realize that my first figure, even my tenth figure, might not turn out perfectly, in fact far from it. But keep practicing, and eventually you will at least turn out to be “competent” at the art of painting figures, if not brilliant!

Overall, then, the content of this book is first rate, and any novice or intermediary modelers should be able to learn a great deal by reading the text, and studying the hundreds of color photographs on the road to improving their model building, painting, and finishing skills. The text reads easily, and the photos speak for themselves, complimenting the written prose admirably. I can therefore recommend this book to anyone wishing to improve their armor modeling and figure painting skills. My thanks to Casemate Publishers for kindly providing IPMS USA with this review sample.