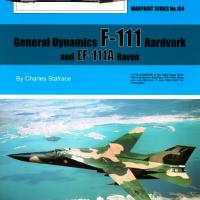 Warpaint’s latest is their standard A4 format, softbound publication that is 88 pages (excluding covers) on the General Dynamics F-111 series. Featuring more than 180 photographs (most in color) along with 34 of Richard J. Caruana’s color profiles, and including the B-Centennial scheme on 68-0028/UH, an F-111E based at Upper Heyford, in June 1976. The color profiles are further enhanced with color scrap illustration of opposite sides of the fuselage as necessary to depict special markings. Nose art and other special markings are also presented enlarged to show off details. For the small scale fans, Richard J. Caruana also includes fold-out 1/72 scale plans.

Charles Stafrace starts out with the development of the F-111, which despite the disastrous interference of Robert S. McNamara, ultimately emerged as an exceptional weapon delivery system. In combat the Aardvark holds one of the safest operational records of any USAF aircraft. The fact that during the Gulf War, that the F-117 stealth fighter and the F-111 were the only two aircraft allowed to attack downtown Baghdad to minimize collateral damage says quite a bit. Charles Stafrace details the introduction to USAF operations and eventually RAAF operations with exceptional clarity as can be seen by the following chapter titles:

I particularly enjoyed Charles Stafrace’s political essay of the British dalliance with the F-111K as a potential substitute for the cancelled TSR.2 program. The end of the F-111 in USAF service came with the end of Desert Storm, where the Aardvark demonstrated that it was a most effective offensive weapon. Of course the reward was retirement in 1996. The Aardvark was done-in, not by a superior replacement, but by accountants. The EF-111A Raven was retired a few years later, followed by the last flight of an RAAF F-111 in December 2010.

This monograph is really a handy reference for the F-111 Aarvark with plenty of photos and illustrations to help you with your 1/48 Aurora/Monogram, Academy, Hobby Boss kits or even the oft-rumored 1/32 Trumpeter kit. If you have any of the Warpaint series, you know how great a value this book is. Highly recommended!

My thanks to Guideline Publications and IPMS/USA for the chance to review this great book.