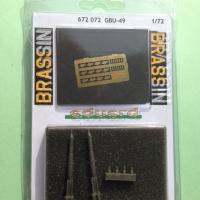 The GBU-49 is an American laser guided bomb consisting of an Enhanced Paveway II GPS/INS-equipped guidance section and a 500 lb. bomb. It is one of the weapons of choice for the MQ-9 Reaper and is often carried by USAF F-16s with two GBU-49s on triple ejector racks on the middle wing pylons.

The set consists of two bomb bodies with the tail fins and guidance sections molded as single pieces except for the seeker head (resin) and the nose and aft guidance fins (photo-etch). Two options are provided for the seeker head, one with the seeker head exposed and the other with the plastic ground cover in place. I chose to use the heads with the cover installed as I plan on displaying the bombs on a parked, but armed aircraft.

The PE fins are well made and very thin, so care must be taken in removing them from the fret and trimming up the attachment points. The aft fins are extremely small and are attached by a simple butt joint with resin bomb. Care must be taken when handling the etched parts are they are very small and difficult to see if dropped, even more so once painted Olive Drab. Fortunately Eduard provides a full set of extra fins for both the nose and tails fins – something I really appreciated when two of the tail fins disappeared when I was spraying the bombs with Future for decaling.

As with Eduard’s other weapons sets, the set includes a comprehensive decal sheet with lots of little stencils to apply to each bomb. The directions illustrate the two common paint schemes for the GBU-49 – an overall olive drab scheme, and one where the guidance set and fins are FS 36375 with just the bomb body in olive drab. I chose the overall olive drab scheme for simplicity and to see how the black decals worked on olive drab. As I expected the yellow decals really stand out against the olive drab, but the black stencils tend to disappear. Next time I will use the grey and OD scheme as I think that will really allow the stencils to show on both colors.

This is another great set from Eduard and a nice expansion of weapons choices for modern aircraft, and drones. I can’t wait to mount these on my MQ-9 Reaper!