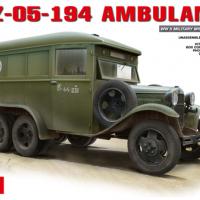 This is an excellent kit, with extremely fine detail, great fit of the parts, and makes a highly realistic model. It’s not easy getting there however. Be prepared for small, delicate parts, microscopic locating pins, unclear instructions on some part locations, and many separate tiny parts where one would suffice without loss of detail. With a little patience an experienced modeler will enjoy a challenging build resulting in a great model.

Gorkovskiy Avtomobilnij Zavod (GAZ) automobile company was a joint venture with the Ford Motor Company prior to WWII. The GAZ-05-194 Ambulance is one of several Soviet Army vehicles based on the Ford Model A truck, with an additional axle for a 2 ton truck. Captured vehicles were also used by Germany’s Wehrmacht.

This kit is one of six models of the GAZ trucks produced by MiniArt. The kit comes on 26 light gray plastic sprues, including six for just the tires and wheels alone. The tires are built up of multiple layers of plastic. There are many small parts and some very thin pieces. Lots of plastic parts with nice crisp detail and minimum mold seams. Some of the locating pins and holes are very small, and some D-shaped pins are so small that it's hard to tell which way they're oriented. There are also two clear plastic sprues, a small decal sheet, and a small photoetch fret.

The instructions are an 8 1/4 x 11 3/4 - 20 page stapled booklet with 65 assembly steps. There are color painting and detailing options for four different vehicles: three used by the Red Army and one former Soviet ambulance captured and used by the German Wehrmacht. Colors are called out in Ammo MIG numbers. A diagram of the sprues is included to aid in finding parts.

Examine sprue connections carefully before removing parts to determine correct location for cut. Many sprue connections are at the end of small locating pins. Very thinly cast pieces are difficult to remove from sprues & clean up so extra care is required.

The engine is assembled first and includes 22 pieces, creating a very nicely detailed assembly. Some of the parts such as A13, A12, A16, and A85 are left hanging for connection in later steps, but they all worked out OK. The engine block has a nice cast texture that becomes more apparent after painting.

Steps 4 through 7 assemble the basic frame, which is comprised of several members with imprecise connection points. It is important with this step to get the frame assembled square and flat.

Steps 8 through 13 assemble the rear axles and connect them to the frame. This is also a very difficult assembly with many small pieces that need to be carefully aligned. The clamp assemblies, parts Fb24 and 25 did not seem to fit well together, and yet they are the anchor points for the leaf springs. Assembly of the axles and leaf springs in step 13 results in a fairly flimsy assembly that is critical to get correct so all of the wheels are on the ground. I attached the leaf springs to the chassis without glue and blocked everything up to try and get it level. The leaf springs can be attached to the chassis without glue for flexibility, but the shock absorber assemblies Fb16 anchor the springs in place. It's not very clear where these absorbers are attached to the differentials.

The tires and wheels are assembled in steps 14 through 19. Each tire consists of seven layers of plastic that are built up to form the tread pattern. This gives nice depth to the treads, but require lots of tedious cleanup of the sprue connections on each layer. The tires needed to be clamped together so the tread layers fit tightly.

Step 20 shows installation of the engine to the chassis, but I held off until the chassis assembly was completed to allow painting the chassis and engines separately.

Steps 21 through 28 complete the chassis and are a very difficult series of assembly steps. The parts are very delicate, which results in very small connection points that are sometimes vague. I assembled as many parts as possible to get the best connections prior to painting. In step 21 the brake lines are attached to the small levers on the axles installed on step eight. Very difficult connections with some delicate parts. The running board brackets installed in step 27 require lots of cleanup and the angle of the brackets is not very clear. The step also installs the muffler and tailpipe, but I could not find the location for the bracket Bb23 on the chassis. The exhaust pipe from the engine has a keynote number 8, which probably means something, but I could not find a key to what it means. Possibly a paint call out but I couldn't find the reference.

Step 27 also installs the brake drums for installation of the wheels in step 28. The rear drums parts Cc2 have a loose fit so I blocked them up on pieces of wood to try and get them all on the same plane. The front brake drums attached to the steering arms in a very uncertain, flimsy way. I turned the wheels slightly and blocked them in place while the glue set. All 10 of the wheels touch the ground, although not at the same time. When the rear wheels are on the ground the front wheels are off the ground. There is a lot of flexibility in the suspensions and frame that it might still be possible to get all the wheels on the ground at the same time.

The chassis was finally done, and the most difficult part of the assembly is over. At this point there were very few places to hold the chassis without breaking another part off. MiniArt has gone the direction of highly detailed, scale thickness parts, which end up in a very nice but delicate model.

Steps 29 through 37 begin assembly of the body parts. Very careful alignment is required for the front fenders, radiator, cab footboard, and the truck bed to make sure everything fits on the chassis. I assembled all of these main parts at one time so I could make adjustments while the glue set to get everything to fit. The radiator ended up too close to the engine so I could only install the shell. The front cowl and dashboard are assembled in steps 37 to 39. I installed the cowl to the chassis along with the front face of the cab, part H8, to make sure they all fit together well. There are many pieces to this assembly but the fit is great and they went together nicely.

Steps 41 through 44 prepare the front of the cab for installation. The windshield frame & glass can be installed after the cab is done to facilitate painting. Steps 45 to 53 install the exterior wall panels for the back of the ambulance, which again fit together very well. Before assembly I painted the interior of the ambulance body AK Interactive Cremeweiss, and used Tamiya Deck Tan and Cremeweiss on the inside of the clear plastic to simulate the painted-out windows.

The hangers for the upper bunk, parts Ha1 and Ha3, are incredibly finely cast and very brittle. One of them snapped in half as I was just looking at it trying to figure out how to get it off of the sprue. They both broke in multiple places and had to be patched back together with plastic rod. I understand MiniArt has had problems with brittle plastic and this may be one of the results. I mounted the hangers, but decided to hold off on the upper bunks, parts Kb1, until later when they get additional hangers from the roof.

Step 59 is an adventure assembling parts to the underside of the roof. Numbers for the straps and the lenses for the ceiling lights are not called out, but are easily identified. Openings for the roof vents are shown on the underside of the roof, but are bigger than the vents and require some filling. I broke all of the straps for the cots, several in multiple places, trying to remove them from the sprue. The straps are numbered as Kb2 and Kb3 on the sprue, but without notation on the assembly drawing it's not clear which one goes where. As near as I could tell they are identical. I started wondering how to reach inside the ambulance body to attach the straps when the roof is glued into place. It didn’t prove to be too difficult, by applying some glue with a dental pick, and then pushing the parts together. The part fit was excellent so the straps ended up in the right place.

One stretcher is provided and shown on the top shelf platform in the body of the ambulance. This needs to be installed before the roof is attached, otherwise it won't go in. The roof fits very nicely considering the number of individual pieces for the body that need to be lined up.

Step 60 installs the rear doors, which I intend to leave open, but won't install until the very end.

The engine covers and headlights are installed in steps 61 through 63. The engine covers fit very nicely together and I left one side open to see the engine. The headlight bracket assemblies are fiddly little parts that go together in a fragile assembly.

The last step, 65, installs the brackets and spare wheels on each side of the engine cover and body. More delicate little parts. I assembled the brackets and glued them to the body, then slipped the wheel in place before the glue dried.

This kit is quite an adventuresome build, lots of small parts and delicate assemblies, but the fit of the parts is exceptional and with a lot of patience will build a very nice little model. This kit should only be attempted by more advanced modelers.

Thanks to MiniArt for making another great variation of the GAZ trucks, to Dragon USA for providing the kit, and to IPMS for letting me do the review.