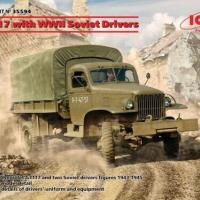 ICM is one of many model companies based in the Ukraine that have been affected by the recent war with Russia. Based in Kyiv, the company has been active as of late in creating and releasing new products and defying the challenges they face. This kit is a rebox with new parts for the kit released back in 2021. Let’s take a look…

The kit comes as the standard ICM kit does—with a colorful box top that slides off of an enclosed brown cardboard box. Parts were packaged well and details were crisp with no flash to speak of.

The first 27 steps cover construction of the lower frame and suspension. Right off the bat. You begin carving up the parts to shorten the suspension—a sign of the challenges to come. Things fit together pretty well though and everything was aligned quite nicely. There is a brief 10 step pause to build the parts of the engine together and install it on the frame. Then it is back to adding parts to the frame to bring us up to step 60. A few parts were broken on the sprue here and were too small to effectively fix, so they were left off since they were buried underneath.

Step 60 begins construction of the cab parts. Here is where I probably should have diverted from the instructions. They would have you attach the cab front and rear to the floor and then the roof. The doors were then added last. Unless you are doing all of this at the same time, you will find the issues I had where the doors didn’t fit into the space left for them. I had decided to paint things as I went as it would have been difficult to access everything after it was all assembled. Disassembling everything to get the doors to fit correctly was nigh on impossible without likely damaging the parts. I would suggest getting the doors, front, and rear square first before capping things off with the roof in the future. That being said, interior detail was nice with dashboard dial decals, and nice detail on the seat and levers and such.

The cab is then attached to the frame and more details added to the engine and radiator assembly. From there, the engine compartment sides and fenders were added and the fit was fine with these. The hood, front grill, and spare tire completed this section of the assembly. Next up is the truck bed assembly- detail is quite nice and the fit was excellent. My only gripe here is that there is nothing included to use as a load for the truck. Steps 112-114 add the bed assembly to the rest of the truck. The tires and their hubs were then assembled and attached. At that point, you have a choice to make from three variants—constructing a canvas cover for the bed, or just using the frame and leaving it open. Also, whether the windshield is down and in place or swung up. Windshield wipers and side mirrors are added to finish things off.

There are two paint schemes offered in box- and the colors vary as long as you like camouflage green for the truck. The schemes include an unknown Red Army unit based in East Germany in spring of 1945 which I chose, or a Lend-Lease scheme from 1944. I used Vallejo Model Air paints and AK Interactive and Mig Productions washes and pigments for the finish. The figures were quite nice although I am not sure why two drivers were needed—I only used one and set the other aside for other projects. The empty bed bothered me so I placed some Value Gear load bits in place.

I am glad to see ICM still in business and putting out great products. For the most part, the fit was near perfect and construction was not too fiddly despite all the steps to create the chassis and frame. I do wish I could go back and retry the cab assembly but you learn sometimes by falling down I guess. It ends up being a nice looking truck to round out one’s WWI collection.

My sincere thanks to ICM and IPMS-USA for the review sample.