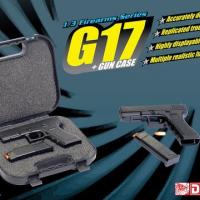 First, let me start off by thanking Dragon USA and IPMS/USA for allowing me the opportunity to review this kit. It was such a fun kit to build, that I actually got a second kit to build as well! Dragon recently dove into the world of large scale models with their new 1/3 Firearms Series. To kick off the series, Dragon started with the world famous Glock 17 9mm pistol. Used worldwide by militaries and law enforcement agencies, the Glock 17 uses a standard NATO 9mm Parabellum cartridge fed from a 17-round clip in the grip [larger clips are available].

Dragon's kit is faithfully crafted and comes in three sprues, as well as two molded case halves and two piece pistols. The pistols are very well done, with seams on the frame showing up where they would on the real thing [actual Glock frames are made from a composite plastic]. Metal springs and pins are also included which allow for working features and pre-cut foam inserts are provided for the gun case.

When completed, the Glock replicas feature removable clips, slides that can be pulled back and locked in the open position, and a pullable trigger. The Glocks come molded in either black or tan, with all other components done in black. Three paint schemes are provided. Since I had two sets, I opted to do two standard black G17s, as well as one each of the other colors. I started by spraying two frames with Tamiya flat black, one with Tamiya Olive Drab, and the third was sprayed with Tamiya Buff. I then mixed up a "bluing" paint from Tamiya flat and semi-gloss black, Tamiya gloss blue, and Future Floor Wax. This was airbrushed onto the slides and barrels of the guns. After a coat of Testor's Acrylic Flat Coat was applied to both the frames and the slides, it provided not only the proper blued steel color on the frames [can be distinguished from the flat black frames] but it also provided a slight sheen difference between the slides and frames which is found in the actual Glock [it helps when you have the real thing available for comparisons]. The bullets were then painted with Tamiya Copper and Model Master's Brass. All other parts were left in their bare plastic, as they were already the correct color and sheen to match the real thing. Construction is really simple, with the only tricky spot being when the slide is attached to the frame. By the time I finished the fourth gun, I was able to build them in under 5 minutes. Additional bullets are provided, as well as the famous Glock loading tool. These are extremely fun to assemble, and with careful painting, can be a very well done addition to a collection. Dragon has already released the second in their series, an M14 Rifle, and I can't wait to see what else they have planned. I'm hoping for an MP5 and an M16 in the near future. Now, does anyone have a good idea on how to display these?