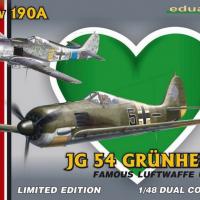 In this kit, released also as a Limited Series edition, we are presented with the Focke-Wulf Fw-190A that flew combat with the well known fighter unit, JG 54 Grunherz. Jagdgeschwader 54 was formed through a very complicated process, but this only served to raise the level of significance of the unit later on. The foundation for the unit was laid in February, 1940, but its formation with three Gruppe (each with Stab and three Staffel, with each Gruppe fielding some forty aircraft) goes back to the summer of the same year. Its Kommodor (Geschwader Commanding Officer) from August 24th was Hannes Trautloft.

The only original component of JG 54 can be considered I.Gruppe (I./JG 54). II./JG 54 was, up to July 1940, an independent unit carrying the designation I./JG 76 (earlier being a component of JG 2), and III./JG 54, similarly an independent entity, originally designated I./JG 21 and operationally subordinate to JG 27. Trautloft was tasked with the chore of taking these elements, combining them into one unit, and leading them successfully into combat. He managed to do this by the end of the Battle of Britain, and his JG 54 became one of the best escort units in the Luftwaffe.

As with most aircraft kits, you start off building the cockpit. Depending on your choices, you will have to make a few modifications for the PE (PE4, PE3, PE8 and 9) control panels to lay flat.

Next came the firewall and the gun mounts; you get 2 choices of guns. The components (L4 and 19 or H5 and 6) are different for each one.

When you finish with the cockpit and gun mounts, it’s time to close the clamshell (fuselage). Here, it is very important that you get the firewall/gun mount aligned properly. If not, you will have big trouble later in the build getting the engine mounts aligned.

The wings are next. Here you have to make some drill holes if you are going to mount the fuel tank rack. The instructions show the locations to drill; look for the indents in the mold for the correct location.

After installing all the parts for the landing gear bays and wing-mounted machine guns, it’s time to marry the fuselage to the wings. Here you can have some gapping issues, but the parts fit together ok and only required a little gap filler around the seams.

The engines are next; they are very nicely designed and have lots of details. The tricky part comes with the exhaust pipes; the kit comes with a mounting tool that you slide on the back of the engine (part L2). It’s very handy, since the pipes only have one contact point for the glue and kind of float out in space when you’re done. The instructions show the locations, but it’s kind of hard to tell where they meet, so you will have to play with them a little to get the alignments right. Note: I would test-fit parts J39 to K25-26. You may have to trim the inside of K26 for them to align correctly.

Mounting the engine: I would first build the mount points (J34, J25, I4), then add the engine.

The main landing gear struts are molded to get the right 8 degree angle offset of the main wheels to the strut and for positioning the struts properly on the wings. This worked nicely and gave the correct angles.
The rest of the parts fall into place to complete the kits.

Painting and decals went on with no issues; Eduard has provided a very nice color painting guide for any of the 10 aircraft choices. The decals are thin and melted into the frame nicely.

I used the basic methods for weathering. After the decals were dry, a coat of gloss clear was applied, followed by a light wash of lamp black artist oil. Then a little touch-up on the panel lines with a darker mix of the lamp black. Then a light dusting of highlight pastels to bring out more details.

While Tamiya has probably turned out more variants of the Fw 190 in 1/48 and Hasegawa has tackled the subject as well, the Eduard kits still have to be the best Fw 190 kits in any scale. They're not for the novice modeler, as all of that detail must be assembled precisely or you'll run into fit problems later on in the assembly process.
Eduard has put together a really nice kit, the details are outstanding, and they look great when you’re done.

I would recommend this kit for medium to advanced modelers.

I would like to thank Eduard and IPMS/USA for the opportunity to conduct this review.