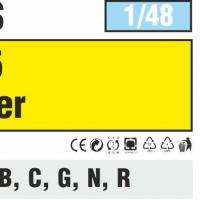 So you want to model the Eduard FW-190A-5 but you don’t want to spend a lot of money to do it or maybe you don’t like to work with photo etch. Maybe you have a huge selection of decals and you just need a canvas to use them on. Whatever the reason, maybe Eduard’s Overtrees are the answer for you.

I’ve said it before I love the way Eduard markets their kits. For those that want the whole hog and then some there are the Royal Class kits. Then comes the great value, the Profipack Editions. This is followed up with the less extravagant Weekend Edition, which is just the kit and decals for two airplanes. Then there is the bargain basement, the Overtree Editions. Traditionally these are very inexpensive but just provide you with the plastic parts, no photo etch, no masks, no decals and no instructions. The Profipack instructions can be downloaded online though. You can purchase the masks and the photo-etch separately, which is still relatively cheaper than the Profipack. You can get just what you want. Don’t want photo etch, don’t buy it. You want the masks, then buy just that. It is a win-win for the modeler and Eduard.

The Overtree FW-190A-5 is a nice kit. It comes in the traditionally smaller plain white cardboard box. It contains five sprues of medium grey plastic with no flash. Three of the sprues are the ‘common’ sprues with lots of extra parts. The other two sprues are the fuselage and wing parts for the A-5. There is another clear sprue with all the clear parts, again with plenty of leftovers.

Since I was given the opportunity to review the LEPT pre-painted photo etch and the TFace Mask set for this kit I would employ them as well. I was also building it alongside the Profipack release I had the instructions and some of the decals I wanted to use. I elected to build up an A-5 that I remember from my childhood. I collected the History of the Second World War magazines from the very beginning. One of them had a tremendous color photo of a line-up of FW-190A-5s as fighter bombers. Complete with red and white letters and spinners and a Mickey Mouse emblem on the nose. I loved that look. The colors captured my imagination. Luckily for me that marking option was available in the Profipack so I had the individual aircraft markings I just needed to source the stencils and the crosses.

Enter BarracudaCals and their marvelous stencils, BC4848373. They are awesome and have the same numbering system as the kit stencils, making them easy to use. Crosses were sourced from Eagle Editions.

So with all of my ducks in a row it was time to build it.

Construction starts in the cockpit as usual. I elected to build up an extra cockpit so that you could see what the kit parts looked like. Either way the cockpit looked great. I prefer the pre-painted photo etch but I’m not opposed to painting the cockpit up out of the box. I painted my cockpit with Tamiya Dark Grey and then used a Roy Sutherland, BarracudaCals owner’s, technique. A 50/50 mix of Future and water then add a couple of drops of Tamiya Black to the mixture and then applying it with a brush over the entire cockpit. This darkens up the recesses and works great if you are going to add a decal to the interior. This was followed up with a coat of Alclad Flat, then a dry brush of RLM 02 and Model Master Aluminum and Magnesium. The seatbelts and shoulder harness was added at this time. A quick coat of Alclad Flat sealed everything together. Microscale Krystal Kleer was added to the instrument faces.

Don’t forget to add the side exhausts and engine part. With that it was time to close up the fuselage. There is a slightly ‘raised’ portion along the join of the model. Even with this slight raised portion the fit of the fuselage was perfect.

With that set aside, the wings were next. The set up of the wheel wells is beautiful. It builds beautifully. I did have to open holes for the ETC rack and replace the center section for the landing gear as my aircraft didn’t have the traditional wheel well doors associated with the early Focke-Wulfs. The fit of these parts was good as well. Don’t forget to add A22, the ammo chutes, I did. I was able to overcome that self-induced error. One thing that I did change from the kit was I cut the inboard 20mm cannons. Then I drilled a hole to replace the exposed part with tubing later. I would have broken them off anyhow. The rest of the wings fit perfectly.

The wing to fuselage fit is perfect. The other parts, such as the cowl rings, were added to the fuselage to complete it. The fit was phenomenal. Adding the horizontal control surfaces and flight controls were just like the rest of the kit, perfect. Since my aircraft had a bomb rack I added that now.

Building up the landing gear is a non-event. I painted mine in RLM-02. The fit is perfect and they align precisely. The only issue I had with the kit was the fit of the wheels. It is very sloppy. So care must be used to align the wheels.

The propeller was built up next. Take care in removing the cooling fan. The fan blades are very fragile. I painted the parts while separated and then brought them together.

It was time to add the clear parts. I used the TFace masks. Because the TFace has to be painted on the inside, you have to mask the inside right away and then remove that before you add the canopy to the model. I add the front portion of the canopy after removing the masks.

The canopy and landing gear were masked up. The model was wiped off with Testors Plastic Prep in preparation for painting. I sprayed Tamiya Dark Grey on the canopy portion. Then the entire model was sprayed with Alclad Grey Primer and Microfiller. There were very little additional cleanup required but they were taken care of and re-primed.

The decaling began with the BarracudaCals. They were finer than the Eduard ones and worked perfectly. They were thin and reacted exceptionally well with Solvaset. The EagleCals worked just as well. The Eduard decals are very thin and need a lot of water to reposition, but they are perfect as well.

Since all the decals were very thin, I oversprayed them with Alclad Flat instead of sealing them first with a clear coat. I didn’t need to use another clear coat.

It was time to start weathering. I start my weathering with a burnt umber artist oils thinned with turpenoid. This was applied to the panel lines. Fading the paint with titanium buff and white was kept to a minimum as these aircraft were new looking in the photo.

I did add some chipping to the wing root and leading edges, as well as, the prop blades. Some exhaust residue was added with Mig Pigments, Russian Earth and Black Smoke. Some oil streaks were added with artist oils. The final bit of weathering was a little bit of mud splash added to the lower wing and some dried mud from Mig pigments on the tires.

Once the weathering was complete I just removed the masks, added the canopy with white glue. The bomb was added to the ETC rack. Then attached an EZ Line antenna and added the prop to finish off the model.

This is an exceptional fitting model and a lot of fun to build. It fit just as well as the Profipack for about 1/3rd the price. The addition of the TFace masks, ZOOM set, BarracudaCals and Eagle Edition decals made this a really unique model. It came out just like my mind’s eye remembers it when I first saw it back in the 1970s. If you want to just enjoy a build these Eduard kits are just what you are looking for. Whether you build the Overtree, Weekend Edition, Profipack or Royal Class, Eduard’s kits can’t be beat for value.

Overtrees are only available for a limited time so be sure to get them as soon as you can.

Thanks to Eduard and IPMS/USA for the review item. You can obtain yours by contacting Eduard directly at www.eduard.com. You can also find them at your local hobby shop or online retailer.