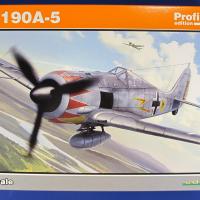 Right on the heels of Eduard’s release of the 1/72nd scale Fw 190A-8 was their Fw 190A-5. When you open the box, you wonder just what kit the parts are for. You see three trees of light gray parts, one clear tree with four canopies on it a great decal sheet, a photo etch sheet and a mask. Of course, many of the parts are for the A-8 and for future variants of the A-8. And, with all of these extra parts, you have to read the instruction sheet for the correct parts number to ensure you don’t go wrong and start building something other than an A-5. Of course you have to decide which of the markings you are going to build, because there are some differences between them.

There are markings for five aircraft, some old and some new. Selection A is Hermann Graf’s colorful tulip nose aircraft from the Spring of 1943. B is Walter Nowotny’s colorful JG 54 green and gray aircraft seen on the Eastern Front in the Fall of 1943. The most eye catching marking to me was Bernard Kunze’s black and white checker nose JG 1 aircraft as it appeared for thirteen days in October 1943. Dietrich Wickop’s JG 1 aircraft is one that I had not seen before, and certainly a colorful one with a red engine cowling and a white bird as his personal marking. Last, is the one I ultimately chose, Egon Mayer’s JG 2 Richthofen mount in France during the Spring of 1943. The reason I chose it was that I wasn’t willing to take a chance on the checkerboard cowling on a review project. Knowing how thin Eduard’s decals are, I knew I stood an excellent chance to really mess it up. I was safer with Egon Mayer’s. There is also a stencil sheet provided that offers every conceivable stencil that ever appear on an Fw 190, and multiple colors, according to the color of the camouflage markings.

Construction starts with the cockpit and you have several choices during construction. I painted everything Mr. Color RLM 66 before beginning. The instrument panels have very fine raised detail, as does the side panels. Some careful painting can produce a really great cockpit. Also included are Eduard’s color photo etch for all of the panels, as well as seat and shoulder harnesses. Though they look very nice, the belts and harnesses appear to be a little large. The cockpit was the first area that made me scratch my head. Usually, Eduard has you remove the raised detail and glue the photo etch to that surface. For the instrument panel, this is not done. The two layers of photo etch are glued together and installed in the cockpit. This makes the mounting of the Revi gunsight rather exciting, since there is not much for it to be glued to. The side panels are the attachment points for the main instrument panel assembly. I looked at the instruction sheet for the A-8 and it uses the kit panel as a backing for the photo etch. Needless to say, all of the photo etch knobs and handles, as well as the rudder pedals are tiny and require a great amount of finesse to work with. I left the gunsight off until later, so I hopefully wouldn’t lose it.

The BMW801D-2 engine is represented by a firewall and half of the front cylinder bank. This, along with the exhaust inserts and a bulkhead are then sandwiched between the two fuselage halves. With some dark washes and some dry brushing, it does look rather nice. However, as Fw 190 fans know, when you put the cooling fan and propeller on, the engine detail disappears. This is where you hit your first snag. You find that the cockpit is too wide for the fuselage halves to be closed. Most of the trimming has to be done on the photo etch instrument panel. The bulkhead also can use a little sanding, as well as the engine bulkhead. It takes a lot of trial and error before you get a good fit.

A really nicely detailed main spar is provided for the wing assembly, and you have the choice of photo etch or plastic for the ribs which are the gear latching points. I carefully folded the photo etch ribs, but never could get them to fit right, so I took the plastic parts, drilled out the lightening holes and used them instead. I was well pleased with them. I never could get part A90 to seat correctly. It is the roof of the wheel well, and no matter what I did, I still had a gap, which I knew did not exist. This fit problem later reared its ugly head when it came time to mate the upper wing halves. I had to do a lot of shaving of the leading edge and top of the wheel well to be able to fit the upper wing. The cannon barrels, parts A41 and A43 were molded in an ovoid profile, not circular, so you may want to substitute some aftermarket barrels.

The upper wing halves to the lower wing require extensive thinning of the trailing edge of the upper wing halves to prevent a step at the trailing edge panel line. The separate ailerons are a great fit. When I tried to mate the wing assembly to the fuselage, there was a tiny gap at each wing root. I glued a .005 plastic sheet on each wing root and it fit perfectly. When I tried to glue the gun access hatch and the forward upper fuselage hatch, it took some clamping and squeezing to close some gaps. The separate rudder fit great and the stabilizer/elevators were also a great fit.

It was at this point that I did all of my major painting. I used Gunze Sanyo RLM 74, 75 and 76 on the upper and lower surfaces, using Blu Tack to set off the camouflage patterns and Scotch clear tape to mask off the yellow area. After everything had set for a couple of days, I sprayed everything with Tamiya’s X-22 Clear. I find myself using this more than I do Future (or whatever it’s called these days) as I have fewer disasters and have never had any blushing or discoloration occur. On to the task of decaling.

Eduard’s decals are some of the finest in the world, seldom needing any kind of setting solution. Here’s where I was really glad that I opted not to do Bernhard Kunze’s markings. I have a feeling those big checkerboard decals would have given me some real fits in getting them where they belong. Putting on the wing walkway lines was a nightmare. When you use warm or hot water, as I do for decals, Eduard’s decals come off of the backing sheet within about ten seconds. And the walkways are so thin and so narrow that they tend to curl up on themselves or fold up on themselves. And, the surface has to be dripping wet, or the decals just won’t slide. I finally managed to get them on in a satisfactory manner, after a lot of holding my breath. There are more than a couple of the various warning decals that are in the wrong place, but it is because I couldn’t get them to move. So, I just matched the other. After all of the decals had set for a day, I coated them again with Tamiya X-22 and then followed up with Tamiya’s new XF-86 Clear Flat. I’ve heard all kinds of wailing concerning it not being dead flat, but I haven’t had any success with any finish being dead flat. Everyone else seems to swear by Dullcote, but I always end up with a satin finish when I use it. I liked the result with the Tamiya Clear Flat.

While all of the various paint sessions were drying, I had a go at all of the fiddly bits of the kit. The centerline bomb rack is made up of three separate pieces. I never was satisfied with their alignment and they are fragile and fiddly. I finally got the rack somewhere close and glued the drop tank on. There are separate canopies for whether you plan to display the canopy open or closed. I used the Tamiya masks and some Tamiya tape to mask off the windscreen and canopy before first spraying with RLM 66 and then RLM 74. The biggest disappointment at this stage was the wheels and the landing gears. You get both early and late wheel hubs and early and late tires, so you can make your own choice on what you use. The detail is fantastic. The only problem is that the wheel hub only has a very small indentation for mounting the axle. And, to compound things, there is no axle. Just an equally short angled stub that mates with the short depression in the hub. Trying to glue the wheel to the landing gear with anything close to the right angle is a sheer guess. And, you pretty much have to use Superglue to hold it in place. The landing gear strut itself appears to be too long, i.e., the oleo is extended, as if there were no weight on it. It should be shorter. You can replace the plastic scissors with a photoetch one, but I opted not to. The mounting of the landing gear is a head scratcher. There is only a shallow depression with a tiny ridge in the landing gear well to attach the landing gear. When you have it properly placed, it will stay, but there is not much to add any stability or strength to it. The retract mechanism adds a little bit of strength, but not much.

The finished model looks every bit like an Fw 190 and makes a great addition to one’s collection. In my estimation, modelers with not much experience will get discouraged with some of the nitpicky parts of the construction, but the experienced modeler can blaze right on through. I am anxious to see what other variants come next.

Thanks to Eduard and IPMS/USA for the review kit and the opportunity to build and review it.

Finished Top Close Up
Previous Next