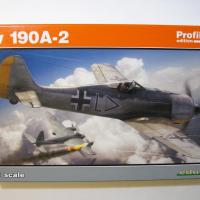 The first prototype of the Fw 190 took to the air on June 1st, 1939 but due to some minor faults (Ok, so there were enough problems that the RLM halted development) it was not accepted into the Luftwaffe until 1941. June 1941 saw the Luftwaffe accept the first 100 Fw 190A-1s that were armed with four 7.9mm MG 17s. November of 41 saw the next version, 190A-2, introduced with two MG 17s and two MG 151s of 20mm caliber in the wings. Part of this series received an additional pair of 20mm MG FFs. The A-2 was powered by the modified BMW 801 C-2 engine and problems with the engine rear bank of cylinders overheating were finally solved by the simple introduction of a ventilation slot on the two sides of the engine cowling as in the A-1 version.

Upon opening the typical sturdy Eduard box you will find a lot of plastic! 6 sprue of grey injected plastic, 1 sprue of clear parts, 2 sheets of decals, two resin pieces, 1 Photo Etch fret, paint masks and a 15-page instruction book. The parts count is really high but not to worry, you will not use half of them (lots of spare parts!!) The plastic is crisply molded, and I could see no sink marks. The clear parts are just that…CLEAR! The decals are nicely printed and in register.

One thing you really should do on this kit is study the instructions first as you are given many options on how you can build this kit. Starting with the detailed cockpit tub you may build it with the use of photo etch or decal or you can paint it. You are supplied with the parts to do any one of the three choices. (Now you know why you get the extras.) This is the procedure you will need for the cockpit consoles and upper & lower instrument panels. I chose to use the photo etch and with this construction the pit is made up of approximately 43 parts.

Eduard made this series of 190s easier to build by eliminating the cowl gun interiors and super detailed engine and I am thankful for that (I build all of my aircraft closed up anyway) Once the cockpit tub is finished and the engine painted you can close up the fuselage and so far, everything fit very well. Next up are the wings and they did a nice job detailing the wheel bays. Take your time and make sure everything is set just right and you should have no problems in this assembly. Once the wings are together you can now attach them to the fuselage along with the stabilizers, rudder, ailerons and cowl rings.

Next up are the final bits such as landing gear, propeller, canopy and guns. The only problem I had here was the outboard guns (parts C8 X 2) as they were short shot. I had some leftover CMK resin barrels and used them instead.

You are provided markings for 5 different A-2s in this kit:

I opted for C as I have a picture of that aircraft. I used Tamiya acrylics to paint this and the decals laid down nicely.

I am very happy that Eduard has released the early versions of the Fw 190 as to me they are the most aesthetically pleasing 190s, they just look fast. This is an outstanding kit and I recommend this for all modeler except beginners.

I would like to thank Eduard for providing this kit for review, the review corps for letting me build it and all of you for reading this.