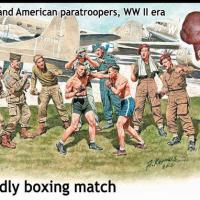 With this kit, Master Box has come up with a creative and animated set of figures. The box contains two sprues with 62 parts in sand yellow plastic. Included are nine figures of US and British soldiers and a small dog. The box art by A. Karaschuk depicts American and British paras in a boxing match in the days leading up to June 6th (the C-47’s in the background all have their invasion stripes). The art is spot-on, and it would have been nice had Master Box given us exactly what was depicted on the box art, but they didn’t, so some detail work to accurize the model is necessary. This is not to imply the figures are not well done. The expressive facial and uniform detail is excellent.

All the figures require clean-up of mold seams with a file or a sanding stick. I usually use tube glue for assembly since it fills gaps. I’ll discuss each figure separately in the order they appear on the box art.

This man holds a cigarette in his left hand, but it is too long and thick for a cigarette, so I painted it as a cigar. This is a very animated figure, with his cap tucked in his epaulette. The US flag, 82nd Airborne Division, and rank patches are all molded on, so I sanded them down, since I plan to use decals. He can also be a member of the 101st Airborne Division; however, the 101st guys hardly ever used the American flag patch, according to Mark Bando in his book 101st Airborne, The Screaming Eagles at Normandy. The problem with this figure, as well as the next two, is his boots. He wears the “Boots, Service, Combat” more commonly known as “Buckle Boots”, which were authorized for wear in November of 1943. I have studied many photos of D-Day troops, and no paratroopers or regular infantry are wearing them. Paratroopers at this time would only have worn the high laced Corcoran jump boots. The buckle boots were authorized for airborne use, and were used later in the 1945 jump into Germany by the 17th Airborne Division. To fix this mistake, sand off the buckle and cuff detail from the side of the boots.

This man also is wearing the tan parachutist’s coat and trousers, and he also has buckle boots that will require modification. He is holding a small dog, which comes in two parts. Glue the dog together before you glue the arm on the figure so you can sand the seam on the dog’ back. On the left side of his garrison cap is a small round patch, dark blue edged red, with a white parachute and glider on it. The man with the cigar has this patch showing on his cap as well.

The third figure holds the towel and water for the boxer. He does not wear any specific paratrooper clothing, but I modified his boots, too. He wears what appears to be the winter undershirt, which would be gray or olive drab. Take care that no seam shows where his arms are glued to his body.

The painting instructions on the back of the box recommend painting him a darker flesh color, and he has African features. I chose not to, since the army was segregated in 1944 and there were no black paratroopers in Europe (the 555th Parachute Infantry Regt. was formed of African-American soldiers, but the war ended before they could be sent to the Pacific). Both boxers require special care that seams where the arms and heads are glued to the body are filled and sanded smooth. Either boxer can represent the US or Brit; the only difference is the shoes – the US would be brown while British troops wore black shoes.

Once again, take care with seams where the arms are glued on. I tried to find any details I could on issue boxing trunks – it seems that dark, civilian style trunks were worn. Use the painting guide on the box art, not the things on the painting guide on back, which looks like something out of a Rocky movie.

Since this man is holding a camera over his face, I left off his arms until I had painted his face, hands and camera. I also left off his cap until last. The cap is a type worn by mechanics and drivers, and would be worn with the green herringbone twill fatigue uniform. The painting guide on the box shows him in the wool drab uniform, but that is not a good option for him. The painting guide is pretty useless anyway, with color call outs for Valejo and Lifecolor – the colors are either obvious, such as “Flesh” for skin tones (really?) or they are wrong, such as recommending the same olive drab shade for both American and British boots.

This figure is wearing the Battle Dress uniform, introduced in 1937, which was the standard uniform for UK troops into the early 60’s. The box art shows him in the blue uniform of the Royal Air Force, but the painting guide show him in the khaki drab of the army. Since the RAF uniform had some details not shown on this figure, I decided to do him as a soldier. I found some old Airfix decals from their Multipose Figure series. These decals included rank stripes, unit titles, and division markings. The titles were too big, but I did find a perfect 50th Northumbrian Division patch, which was a unit that saw action on D-Day. I painted the red arc unit titles. British troops wore their markings on both sleeves, so each arm has the red unit title, 50th Div. patch, and rank stripes. The box art shows him with his hand on the shoulder of the man with the camera; however, I found him a better fit with the man with towel on his neck.

Man with Towel on Neck

This figure (and the next) are shown as British Paras on the box art, but the figure as sculpted has nothing that would mark him as a paratrooper. The Wing badge on the Beret is not there, but a smaller round badge is. The painting guide on the box back shows these two figures as Royal Marine Commandos, another unit that played a role on D-Day. If you wish to show him as a paratrooper, you will have to file off the round badge and add a device that would replicate the British Para wings. So, I painted him as a Marine Commando. This figure has no other markings on him. He has the towel over his neck, which comes as 2 separate pieces to be glued to part of the towel molded to his neck. It will require some filing and sanding to eliminate the gap. He wears an undershirt and the battledress trousers.

Also painted as a Royal Marine Commando, he holds a cup in his right hand, which is flat on top, so drill the top out and widen the hole with your Xacto knife. He wears the Battledress uniform and there are no decals for Royal Marine Commandos, so I had to paint them in. A small black title is on the top, with a black circle underneath. Red lettering is on the title, and the insignia of a bird over an anchor and Tommy gun is also in red. I painted the three battledress uniforms in slightly different tones of earth brown. It seems that the canvas leggings worn by Royal Marines were a darker, greener color. The berets were dark green, and the badge was a bronze color. I mixed some dark brown with gold for the cap badges.

After painting, I added decals where I could and then gave the figures a shot of Testors Clear Flat. I used clear gloss on the cup, camera lens, and wristwatch on the Man with Towel.

This was an unusual kit. I have done many figure kits in my life and this was the first with no weapons, field gear (other than the two canteens), or helmets. It’s a fun build with many options that will find its way into many dioramas. As always, thanks to Dragon Models USA for the review kit and IPMS/USA for the review opportunity.