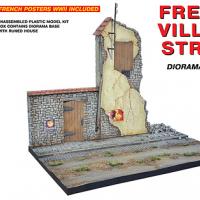 MiniArt is a Ukraine company that was established in 2001 and released their first kit in 2003. They have released many of these diorama series kits over the years.

Upon opening the box, you will find several vacuum formed sheets that make up the base and the structures, with a couple sprues of injection molded parts and sheet of posters. This has been the norm for MiniArt in their “Diorama Series” kits.

This was the first vacuum formed kit that I have ever worked on, so there was a learning curve for me. If you have never worked with a vacuum formed kit, this is a great starter kit for you to practice on. MiniArt also provides step by step instructions on how to assemble their kits at https://miniart-models.com/wp-content/uploads/2016/06/36050_instr.pdf

Assembly was pretty straightforward and the overall fit was pretty good. There were a few areas that needed some putty just to fill some gaps. I used Gunze Mr. Dissolved Putty to fill these. One thing that has to be dealt with during assembly is the technological edges. These are bumps that show up on the vacuum formed pieces that result from the vacuum forming process to get the plastic to snuggle tightly to the mold. They must be removed from the pieces, as they would not look right after final assembly. I found the best way to remove them was with a sharp #11 X-acto blade. No matter how careful I was, several ended up leaving holes. I just filled these with the dissolved putty from the backside of the part and it blended well. Due to the fact that the base piece is vacuum formed, it is not very rigid; you may want to consider putting a piece of wood under the base or filling it with some type of filler material. I used a sculptamold product with perfect results.

The kit builds to a really nice display piece and should enhance any military subject from that campaign.