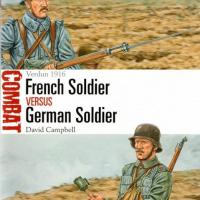 In his organization of this book, Mr. Campbell provides a logical approach to this ground combat at Verdun. The Table of Contents provides for the basic outline:

The publishers’ notes include this summary of Campbell’s book:

“On 21 February 1916, the German Army launched a major attack on the French fortress of Verdun. The Germans were confident that the ensuing battle would compel France to expend its strategic reserves in a savage attritional battle, thereby wearing down Allied fighting power on the Western Front. However, initial German success in capturing a key early objective, Fort Douaumont, was swiftly stemmed by the French defenses, despite heavy French casualties. The Germans then switched objectives but made slow progress towards their goals; by July, the battle had become a stalemate.

During the protracted struggle for Verdun, the two sides' infantrymen faced appalling battlefield conditions; their training, equipment and doctrine would be tested to the limit and beyond. New technologies, including flamethrowers, hand grenades, trench mortars and more mobile machine guns, would play a key role in the hands of infantry specialists thrown into the developing battle, and innovations in combat communications were employed to overcome the confusion of the battlefield. This study outlines the two sides' wider approach to the evolving battle, before assessing the preparations and combat record of the French and German fighting men who fought one another during three pivotal moments of the 10½-month struggle for Verdun.”

As you can read, there are great notes describing the leaders for both the German and French Generals who commanded their respective forces during some of the pivotal battles surrounding the Verdun conflict. I was pleased to see the descriptive coverage about Fort Douaumont, where I have visited several times in recent years, allowing me to learn and see first-hand about the terrible conflict of World War I.

There is also a good deal of details provided in how the respective armies were recruited and trained. The Tactics and Weapons provide excellent descriptive details, as well as color photos of the respective weapons. These three major battles are described in detail, with maps detailing both the French and German units with battlefield environments and numerous black and white period photos. Another benefit provided in this and other Osprey books, are the descriptive color drawings of the uniforms and weapons for infantry troops on both sides. I can imagine the figure painters among us utilizing these drawings in applying them to models, dioramas and figures.

Though this book is very thorough and compelling in its descriptions, I also urge those interested in the Verdun battles to add the earlier Campaign volume number 93, “Verdun 1916 - They shall not pass”, by author William Martin, to your references.

My thanks to Osprey Publishers for the review copy and my thanks to IPMS/USA for my opportunity to provide this review.