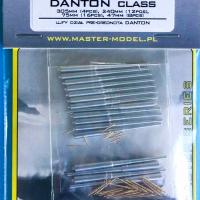 The Danton Class represented six pre-dreadnought battleships of the French Navy, built in France between 1907 and 1911. Outclassed before they were completed, and obsolete by the end of World War One, the five surviving ships were relegated to second-line roles by 1920. The ships included the Danton (sunk by U-64 in 1917), Condorcet (Scrapped 1949), Diderot (Scrapped 1937), Mirabeau (Scrapped 1921), Vergniaud (Scrapped 1928), and Voltaire (Scuttled 1938, scraped 1950). The main battery consisted of four 305mm/45 Modèle 1906 guns in two twin gun turrets. The secondary battery consisted of twelve 240mm/50 Modèle 1902 guns in six twin gun turrets. Torpedo boat defense was supplied by sixteen 75mm (3.0”) Modèle 1908 Schneider guns and ten 47mm (1.9”) Hotchkiss guns.

Hobby Boss released the Danton in 2016, followed by the Voltaire. The Condorcet has been announced as a 2017 release. Although the specs for the Danton class call for ten 47mm Hotchkiss guns, Hobby Boss only provides eight. I have not seen this discrepancy noted in any of the reviews, so I don’t know if it’s an issue. This set will probably also work on the resin Combrig Models 1/350 Danton that was released in 2013.

Notable is the re-sealable packaging that Master Model uses that makes the parts easy to review and then stuff back into the package securely. That being said, you will want to be careful handling the brass barrels as their small size makes them an easy sacrifice to the carpet monster.

This Master Model set provides you with 40 barrels: Four machined aluminum 305mm (12”) barrels; twelve machined aluminum 240mm/50 (9.45”) barrels; sixteen 75mm (3”) barrels, eight 47mm (1.9”) barrels; and sixteen resin parts to mount the 305mm and 240mm/50 barrels. You also get a single page instruction sheet. As you can see in the comparison photo below, the improvements are most noticeable in the smaller barrels due to the limitations of injection plastic molding. The other huge benefit is clean up of the mold seams and sprue attachment points. Please note that the green background photographs are courtesy Master Model.

Detaching the resin parts from the sprue should be done with a razor saw. Using snips will only cause the resin to snap in a place you don’t need. Clean up is really not necessary, since the resin will be hidden within the turret housing. Assembling the resin and brass is quite simple due to the excellent fit. Mounting the barrels into the resin is simple, just make sure the barrels are pointed correctly and are not toed in or out. The smaller brass barrels will be more fun since you will need to cut the styrene barrel off and drill a hole in the plastic breach. The directions call out a 0.5 mm (#76) bit for the 75mm barrels; and a 0.3mm bit (~#83) for the Hotchkiss gun barrels. You will want to be very careful to center your drill bit on both your x-axis and y-axis of the gun.

Be sure to use your favorite CA (super glue) or epoxy, as the normal plastic glues or solvents will not react with the resin or brass. You will also want to be careful painting the barrels since paint can easily foul the hollowed out muzzles.

Highly recommended! This set is a super upgrade over the over-sized injected kit parts. There are no mold seams, nor sprue attachments to fix. This excellent barrel set will shoot you in the right direction!

Thanks to Master Model and IPMS/USA for the opportunity to review this set.