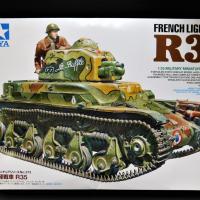 Tamiya’s French Light Tank R35 is a new tooled kit of the pre-World War II tank. By the 1930s French military planners could no longer ignore the obsolescence of their masterpiece FT17 tank from late WWI, and work started on a genuine successor to fill the void. One of the answers they came up with was the R35 light tank, which utilized rolled steel lower and three-piece cast upper hull designs and was armed with the short barreled 37mm gun. It was crewed by two. When hostilities with Nazi Germany burst into life in May 1940 the R35 was right in the front line. While it showed its armor was reliable, the 37mm gun was inadequate when it came to take out German armor. The Fall of France in June 1940 meant that production of the R35 was curtailed to approximately 1,600 units.

This new kit consists of four sprues, a small decal sheet, instruction sheet and some poly caps. Two of the sprues are the same since they are the tracks and suspension. The turret comes loose. There is no photo etched or clear parts included. The instruction sheet is 21 steps long and is typical Tamiya folded design with it being five pages long when unfolded. I like to copy each page separately, three-hole punch the copies and put them in a binder to make a booklet. This is so much easier to just turn pages then fold and unfold the long original instruction sheet. There is a separate booklet of background information on the tank and two color plates for painting and decal placement. The decal sheet is only about 2” by 5” and has about 20 decals for two vehicles.

Assembly begins with the lower hull being built from flat pieces, no bathtub style with this kit. Once you get this together, you see that the kit is only about five inches long. The suspension builds up easily and is non-working. The road wheels are sandwiched in between their brackets, so no leaving them loose for painting. There is a small gap where the upper rounded hull and lower hull meet. Since this is a cast hull, I used a lot of glue to melt the plastic, squeezed the parts together then stippled the seam with a stiff brush. A little sanding and the seam was mostly hidden. The tracks are very tiny and do not click together. When assembly, glue will have to be added to each link to keep them together. I split them each track into two parts, a top and bottom piece, so I could sandwich them onto the sprocket after painting.

The muffler cover is a shade too small. There is a gap on both sides since the muffler is hollow, but the cover is too small. The tools are molded together on a backing plate, kind of like very old Tamiya kits were. I really did not like this since it made them hard to paint decently. The tow cable is molded as one piece of plastic, so some detail is lost there. I think string would look better wrapped up in place of the kit cable. I am sure that there will be photo etched aftermarket sets to replace these softly detailed parts.

I left the tailpipe off until after painting. I had to clip off the mounting pin so it would slide behind the cover on the rear deck. The main gun assembly has a nasty seem on the top. The extremely small co-axle machine gun barrel is almost too small to drill out. My smallest drill bit, #61, was still too big. There are no interior details in the turret except on the rear door. The figure will sit on this, so much of it is hidden. The figure is very good and sits nicely on the open rear door. The arms have mounting locator nubs that will help get the correct angles so he will learn correctly to the right side. There was only three parts left over after construction.

I painted using the five-color paint scheme for the 21st Combat Tank Battalion of June 1940. I airbrushed very closely, then used a brush to make the black camouflage dividing lines. I also did some touch up of overspray with this brush. I airbrushed for about 45 minutes straight to get this interesting camouflage look. The decals laid down great on a gloss coat with only a couple coats of setting solution needed.

I spent about a total of about 8 hours building this kit and maybe a hour and half painting and weathering, so it is quick build. I really enjoyed the great fit of the parts, the simple to follow instructions and the look of this small tank when done.

I would like to thank Tamiya and IPMS for the opportunity to build and review this fun kit.

Close up of right side of turret