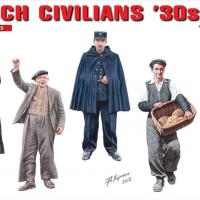 Mini-Art continues to expand its 1/35 line of figures this time with a “French Civilian” set, with a total of 53 parts for 5-figures. One of the figures is a priest, another one a middle-aged business person, a French policeman, one young man carrying some bread in a basket (or is it a member of the resistance?) and an old man, with a raised arm, like if it were to be celebrating the liberation.

You get two sprues, plus a small sprue map in the box. Color instructions are called on the back of the box. There is no flash in the figures, but some line molding removal will be needed.

Most figures are multipieces, with several having two or more parts for the torso and in most cases the hats are molded separately from the head.

In the case of the old man and the business man, due to the flaps on their jackets, those parts have been molded independently. That way you can paint the lower layers of their clothing and then glue (and filling/sanding if it were to be needed) the outer coat before painting. Very smart engineering of the parts, if you ask me.

While this set is called “French” civilians, other than the French policeman, all the other figures could find their way into any ’30-’40 western European setting, or maybe even a southern European (Italy, Greece, etc) setting as well.

Recommended for your next Western European diorama.

I would like to thank Model Rectifier Corporation, Mini-Art and IPMS/USA for the review sample.