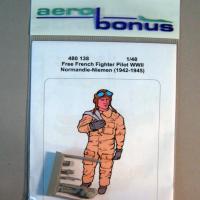 Normandie-Niemen were Free French fighters who flew for the Russians following the fall of France. Their exploits while flying Yak-3s is the stuff of legends. Until now, if you wanted to have one of these pilots in your diorama, you had to settle on a Russian pilot in Russian flight gear. Not anymore.

Molded in light grey resin, this pilot figure contains four parts: the body; arm; and two heads, one with a dress hat and one with a flying helmet on. The pose is completely natural with the pilot standing upright with a parachute draped over his shoulder. You can put either head on him. I’m going to put the dress cap on mine, since it is uniquely French. Both faces are well sculpted and very high quality.

Assembly is easy, just remove the parts from the block and assemble. The figure will look really nice next to an Eduard, Zvezda, or Accurate Miniatures Yak-3.

These figures from Aerobonus are impressive and inexpensive. They make great starter figures and also a nice addition to an aircraft display or diorama.

Another great job by Aerobonus.

Thanks to Aires and IPMS/USA for the review kit. You can obtain yours by contacting Aires at www.aires.cz or at your local hobby shop or online retailer.