At the Forward Edge of Battle: A History of the Pakistan Armored Corps 1938-2016 Volume 1 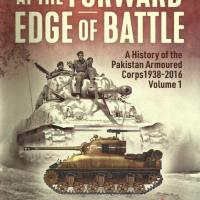 Some decades before Pakistan became a separate nation, India had its own armored corps serving as a colonial force. Realistically, it was more of an armored unit in name than in fact, as early on their British overlords put them right at the bottom of the list in terms of supplies, even as World War Two swept the globe. Unspoken (for the most part) at the time was the belief that Indian “natives” were, perhaps, a wee bit too unsophisticated to manage large mechanical devices like armored vehicles – colonial thinking at its best.

Nonetheless, these Indians did what they could with lorries and a few outdated armored cars, fighting with some distinction on the desert front in Africa, first in Iraq and then Syria, coming up against the dreaded Afrika Korps at Gazala, by this time equipped with a number of gun portees which they used with good effect against both the Germans and Italians. They would then go on to fight against the Japanese in Burma, becoming one of the few British Commonwealth units to engage all of the Axis forces during World War Two.

After the war was over, of course, Britain was reconsidering its colonial policy in the face of growing restlessness among the locals. This eventually led to the “Great Divide” in which India sheared itself into separate Hindu-dominated and Muslim-dominated countries.

After all this time has passed, it’s hard for us to fathom the heartbreak, misery, suffering and death inflicted on millions as a result of this political decision, but the consequences are felt to this very day. As the “Pax Britannica” ebbed and the British pulled out, the entire Indian armored service was forced to choose up sides, with both Muslims and Hindus fleeing under severe hardship and often in great danger from hysterical and bloodthirsty mobs.

One major consequence of the “Great Divide” – at least as it pertains to this book - is that almost every military action the Pakistani armored corps has undertaken since has been against their former colleagues. Nothing is uglier than civil war, and this one has been a sparking point now for almost 70 years.

This well-written overview covers all this in good detail, including the efforts the Pakistani Armored Corps leadership undertook since the breakup to obtain more modern equipment than the various U.S. war surplus Shermans they mostly had in their fledgling years. This has included newer M-47s and M-48s as well as captured French AMX13/75s and other similar pieces of equipment. As this is only volume 1, I assume their more recent acquisition of Soviet equipment will be covered in more detail in the second volume.

Overall, this book is a good study of a sometimes much-maligned fighting force – one that has proven its mettle on more than one occasion despite the obstacles thrust upon it. They have established a fine reputation over the years, and this book covers that and more in excellent detail. It’s an aspect of 20th century wars in Asia I had very little understanding of until I got this journal - highly recommended for anyone interested in the smaller armored forces in the world.

My thanks to Helios and Company for publishing this fascinating piece and to IPMS/USA for letting me broaden my horizons a bit. Most interesting!