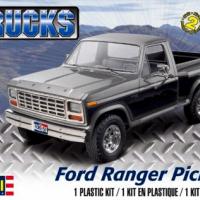 The Ford Ranger has been the number one selling vehicle in America for over three decades. It’s hard to argue with that kind of success.

This review covers the Ford Ranger Pickup Truck 1:24 Scale Revell Model Kit #85-4360. This is a nice clean kit with some pretty good detailing and it is one that can readily be improved with some additional work. Just adding some foil to the trim and a wired engine makes it a standout on the display shelf. This is a re-release as it has seen other boxings in the past.

This kit has 78 parts molded in white, clear and chrome with vinyl tires. The decals are newly designed for a two-tone color scheme. The instructions are well presented, although there are some errors in it. It has a nicely detailed engine and interior. Finished dimensions are: Length: 7-13/16", Width: 3-15/16", Height: 3".

Assembly starts with the motor. At fifteen pieces it’s a pretty basic V-8 with molded in detail but it dresses up well if you add some wires. There’s no oil filter on this one so you’ll have to fab one to give it a complete look. When you’re done set it aside to dry.

The chassis is a one-piece unit and there is a copyright script on the spare tire block that needs to be removed for realism. I picked out some of the detail by painting the various features and it looks pretty good. It wouldn’t be hard to remove the exhaust and set it off to improve that look also. After you add in the transfer case and engine the chassis looks pretty good. You can give it a little more detail when installing the suspension components by painting the shocks and spring coils too. I did find that the shocks didn’t seem to line up with the mounts so I sheared off the mounts and glued them to the inside of the rails more toward the rear pumpkin. This kit also lends itself to larger wheels using some lift blocks and a little longer coil spring like that from an ink pen. The kit supplied wheels are not bad but I opted for some aftermarket ones. The tires are great and non-directional so they can be installed at any corner.

I gave the dash a two-tone scheme and downloaded a few gauges from the internet to print out for the instruments. It’s a basic kit, but with a few additions like this, it can really be a nice model. The rest of the interior goes together well and I added some flocking to simulate carpeting. On top of that, some downloaded floor mats make for a nice touch too.

There are some of the normal parting lines and minimal flash to remove on the body. I was pretty impressed at how clean it was considering the number of times this kit has been re-issued. One thing to watch for is that the instructions show the fender being installed incorrectly. The steps on the fenders go to the front of the bed and not as shown at the rear. I wanted to install the sunroof so I used the backside of a hobby knife blade to scribe out the pre-marked panel in the roof. I trimmed that up and gave the body parts a good wet sanding to get the body parts ready for primer. Follow that up with your favorite color.

The decals might present a bit of a challenge for a novice builder because of their size. I suggest plenty of water on the model and the use of some decal setting solution. With the large side body decals I was able to make an instant two-tone truck with nice clean edges and no masking! For the bed of the truck I printed out some wood looking decals and placed them onto the bed with generous amounts of setting solution. After that, I painted the raised ribs aluminum and was happy with the look. I then put a new blade in my hobby knife and foiled the trim for an authentic appearance. The rest of the parts installed easily with no real fit issues. The engine bay has a nice look to it and the stance is pretty close to the actual vehicles.

This is an easy build and even though I added some features it was still finished in about 10 hours. It lends itself to add-ons but it makes for a nice “builder’s blockbuster” to get something done that looks great on the shelf in a short time. There was one instruction error involving the bed’s side walls and curiously, there was no radiator provided even though there’s an open engine bay. The sun roof is nice looking, if a little large for scale, and with a color printer to add some details like rear window film and some dash gauges this kit looks pretty nice on its own. It also appears to be the basis for a “high roller” 4X4. The parts fit together well and there’s minimal flash to deal with. If you’re looking to add a nice 4X4 to your shelf with great potential and easy construction this will do just fine! It was a pleasure to build and I have to thank Revell for getting this kit out there and IPMS for letting me review it.