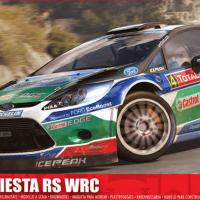 I must admit to being a huge WRC (World Rally Championship) fan. Like the Formula 1 World Series, the WRC races take place in different countries around the world each season. Races alternate between various surfaces: tarmac, gravel, dirt, snow/ice, and often multiple surfaces within the same race. The racers consist of two person crews, driver and navigator/co-driver, representing either a “works” team or being an “independent”. With the occasional exception, the top three finishers in each race come from the “works” teams, as due to the big money behind such teams, they are able to afford the most advanced cars, the top driver talent, and the highly trained and disciplined mechanics necessary to sustain a car over the course of an individual race and the entire season. For the past many years, the Big Guns have been Subaru, Citroen, and Ford.

Most WRC model car kits that I have seen over the years have been from one of the two main car scales: 1/24th or 1/43rd. For me the latter is really a bit small, with too many compromises in detail, and when the detail is there, the parts are very small, and thus very fiddly. On the other hand, the 1/24th scale kits, from the likes of Tamiya and Hasegawa, tend to be on the pricey side. Worse, for a fan of the current racing series, Tamiya and Hasegawa haven’t released any new kits in a number of years. Enter Airfix to the world of WRC models with a new intermediary scale, 1/32nd. They currently have two car models from the current rounds of the WRC, the Mini Countryman WRC and the kit under discussion today, the Ford Fiesta RS WRC, built by M-Sport for the Ford works team.

Since the takeover of Airfix by Hornby a few years ago, I have been hearing a lot of positive buzz regarding the quality of the latest toolings from Airfix. The Ford Fiesta is clearly one of these better kits, with good detail on most of the parts, no sink marks, no flash, only a couple of annoying ejector pin marks, and the amount of detail is pretty decent. The one area that still needs some work is the engineering, in terms of positive fit of the parts, but more about this later.

Construction begins with the assembly of the main underside of the chassis, which is mated to the floor of the vehicle’s interior. One immediate problem is that Airfix calls out colors to paint the model by number (their Humbrol series of paints only), but fails to provide a full list of what those numbers represent in the instructions. I had to track them down via the Airfix web site. Following the underbody/interior floor, Airfix has the modeler assemble the two-part shock/wheel mount parts. Note that while these four units appear to look all the same at first or even second glance, they are not, being different front and rear units. So be careful here not to mix them up. The wheels themselves are two-part units, with pretty decent hub detail. Some filler was required between the two wheel parts. Make sure when you mount the wheels that you have the brake units pointing the correct way, per the instructions – not that you can really see said brake detail once the model is complete without great difficulty!

The interior of the driver/co-driver area is fairly well detailed, though oddly there are no decals for the instrument consoles. I feel it wouldn’t have added anything to the cost of the kit to provide a couple of water-slide decals to provide this cabin detail. Three separate parts make up the driver’s steering column, and you get a separate brake/clutch/accelerator part. The driver and co-driver seats are nicely detailed, though they did come with a large ejection pin mark in an awkward place to reach. Thankfully, it was a raised pin mark, so no filler was required to deal with it, just some very careful sanding. A couple of additional mold flaws were found in the seats as well, but again, these were fairly easy to remove without damaging the parts. The seats come with some very nice injection plastic harness detail parts, which appears to be a first in any scale for a WRC kit. I took the time to thin these parts a bit, and for the scale, they look very nice. A multi-part roll cage is provided in the kit, and the modeler will need to align these parts carefully so they don’t interfere with the installation of any of the other cab interior parts. It is all rather cramped in these racing cars! A spare tire is also included for the rear section of the interior, though not the straps that secure it. These can be made, if desired, with some thin strips of masking tape, painted a suitable color.

Following construction of the chassis and cab interior, we proceed to the main body shell, Part 72. Detail on this is fairly decent, although there are a few mold lines that need careful removing before proceeding forward. To Part 72, in Section 21, I then added Part 57, the hood vents. I then sprayed the body shell with Gunze Mr Surfacer 1200 lacquer primer to give the paint a nice smooth surface to bond to, and to help identify any additional mold flaws that might need dealing with. None were found, so I proceeded to look for a suitable “Ford Racing Blue” color to paint the car body. Airfix recommends Humbrol 14, but I didn’t have any of that in stock, and besides, I much prefer lacquer paints to enamels, due to their tough finish. I settled upon Tamiya TS-15 Blue which, if I am honest, is probably in need of lightening a bit, but such is life. Once this was thoroughly dry, I then looked at the color photos of what appears to be a real car in the instructions, to see what areas needed painting black. Masking was then appropriately applied, and Tamiya XF-69 NATO Black was airbrushed onto the body shell. With the masking removed, an application of Tamiya X-22 Clear Gloss was applied in a series of light coatings to build up a super glossy finish for the decals to adhere to.

The Decals are by FAR the highlight of this kit, in more ways than one. First, there are approximately 55 decals on a kit that measures only 4.5 inches by 2 inches, many of them very large! Second, the quality of these decals is outstanding. The colors are vivid, the printing in total register, and despite the size of many of the decals and the fact that they need to conform to uneven surfaces, they all went down with very little effort. I utilized Gunze’s Mr Mark Softer and Mr Mark Setter two-part decal setting solution, and they worked nicely. I initially applied the largest of the decals, the door and hood “Castrol Edge” and main roof decals. Once these were thoroughly dry, I gave the body shell another thin coat of Tamiya X-22 gloss clear to seal these. I didn’t want later applications of decal setting solution potentially to mar these while I applied the body’s small decals. PATIENCE is the watchword here, and with 55 or so decals to apply, it took me a number of evenings to get through them all. Once all were in place, another sealing coat of Tamiya X-22 was applied.

While the body shell was receiving its decal application over multiple nights, I painted and gloss coated other areas of the kit to receive decals, namely the tires and the rear body wing. Once these decals had dried, they too received a protective coat of X-22 Gloss Clear, while the wheels also received a secondary coat of Matt clear, as you don’t want gloss tires!

Then came the most difficult part of the whole build: the attempt to put the car’s windows in place. In all my previous builds of rally car models in 1/24th scale, the windows (front, rear, and sides) came as a one piece unit. In a well-engineered kit, this makes perfect sense, in that it insures everything lines up nicely: the windows, with the openings they are meant to go in. Airfix, in the smaller scale no less, decided to provide the modeler with FOUR window parts: one front, one rear, and two sides. Great care must be taken to test fit each window and trim/sand where necessary to get as good a fit as your skills allow. And even then, Airfix has you mounting the windows in such a way that the glue tabs are attached to the interior roof of the main body shell. These parts really need to be clamped for the best results, but I couldn’t figure out how to make any of my clamps work in the confined space available. And what to use for glue? The body shell was going to need to be twisted to some extent once the windows were installed, to get it onto the chassis per the Airfix instructions. So the glue needed to hold the parts while this stress was applied. In the end, I settled on super glue for the roof attachment points, and hoped it wouldn’t fog the glass (it didn’t), helped along with some VERY careful application of accelerator. I also applied some Gator Glue to give added support around the edges of the windows, where super glue wasn’t appropriate. One of the side windows just wouldn’t fit nicely for me, but I managed to find a clamp to hold it in place, together with a liberal application of Gator Glue. In the end, it popped out slightly, which is a pity.

In hindsight, perhaps I should have done the following for the windows: first, very carefully cut off the roof mounting tabs. Then, once the body shell was primed, painted, and decaled, I should have test-fitted the windows and slowly begun to sand away small amounts of clear plastic until the parts were a drop fit into the window openings. Once this was done, applying a small amount of Testors canopy cement would hold the window parts in place. But I didn’t.

Once the windows were in place on the review model and the glue dried, I installed the front lower body air intake section, Part 63, which had been painted earlier and its two decals applied and sealed with gloss clear. Then, following the instructions carefully, I mounted the completed body shell onto the chassis. For the most part, this appeared to go fairly well. Then I mounted the wheel hub/tires to the body, making sure all four hub/tire units evenly touch the ground, and attached the previously painted roof aerials. Lastly, I installed the two door mirrors and the rear body “wing”, and I was done.

The end result of all this work is a very nice looking racing car model. Thanks to the wonderful decals, it produces a very colorful one, as well. However, due to the challenge of applying all the decals, plus figuring out how to get the average-fitting windows in place and keeping them there, this kit offers a substantial completion challenge, in my opinion. Thus, I can only recommend it to the more experienced modelers out there.

I would like to offer my sincere gratitude Airfix’s US distributor Hornby America, and also to IPMS-USA, for the opportunity to test my modeling skills on this kit.