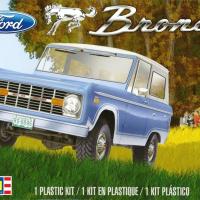 Modelers have waited a long time for a kit of the first generation Ford Bronco and Revell has finally done it! This kit can be built as a 1971 or 1973 version (an air cleaner option) with the included 289 V8 engine. With the help of Jeff Trapp’s Bronco Graveyard in Brighton, MI, Revell has made a faithful representation of the first Ford SUV. I’m pretty sure that we’ll be seeing other versions of this rugged 4X4 too.

This build begins with the engine, and it is straightforward. One of the alignment pins for the block halves was missing on my kit, but you can simply align the block until the glue sets. The engine is very detailed with 20 pieces including a separate oil filter and distributor. I painted mine Ford Engine Blue.

Oddly the frame has copyright script in three locations. I removed all but the one on the inside of the fuel tank as it won’t be seen after construction. After installing the engine into the frame, I added the exhaust which lined up very well to the manifolds. The transfer case is added to the tranny, and the leaf springs fit perfectly.

On the right side of the frame, the posthole for the skid plate was filled in. I just used the other side to line it up and drill it out. I used some Superglue here to build the suspension for strength. The rear axle and shocks fit as they should, and the front control arms are installed. The contrasting color of the shocks really makes the semi-gloss black stand out. The front suspension is installed trapping the axle in place, and it all lines up just right.

The wheels go together nicely, and they use the metal pins that Revell has employed lately. The tires are pretty good representations of the off-road style tires on the original Bronco, sans logos. Another touch of Superglue secures the axle pins to the axles.

I painted the interior floor pan flat black, and the seats white to contrast with the pattern on the seat inserts. I thought they were a great inclusion for the interior scheme. The only surprise on the interior was having to open up the mounting holes for the roll bar. That is a good indicator that other versions of the body style are forthcoming. Just use a small drill or the tip of a hobby knife blade to ream out the holes to accept the roll bar parts. The seat and the rear seat frame assembled easily. I painted the insets on the interior door panels white, and the surrounding was body color. It makes for a colorful interior scheme. The dashboard is nicely detailed and installs easily and the gauge decals look great.

The build starts going together quickly at this point. The interior is placed into the body and then the body goes onto the chassis. The engine bay is blackened out and the battery decal is a nice touch. Installing the radiator and surround completes most of the engine bay, and the kit’s sole option of modifying the air cleaner is added at this point.

A little blackwash to the grill and detailing of the turn signals completes the front end. The rear end taillights need to be painted clear red and the working swing-out spare tire carrier is assembled and installed without glue. The windshield, wipers, and chrome pieces have nice glue points, and install well. The hood and top are added without glue, and complete assembly of the body. The decals are opaque and just the right thickness, but still some setting solution is helpful for the large body stripes.

Finally, a great looking, well designed model of the first Ford Bronco. This kit has virtually no flash, and went to together flawlessly with regard to fitment. There are at least two other body styles that could be forthcoming, and aside from that, the possibilities for customizing this platform are endless. With the addition of aftermarket parts like a snowplow or some big “mudders”, this kit can be the base for many iterations of the venerable Bronco – just like the real thing!

Kudos to Revell (proof that they are listening to their customers) for issuing this new kit, and to IPMS for letting me share this review with everyone.

Picture shows the location of the missing posthole

Complete with top off