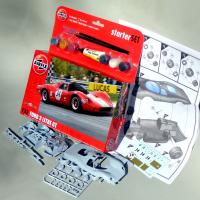 Thanks to Airfix from supplying this kit for review and to IPMS/USA for allowing me to review it.

In the world of motorsport, the rules for the most advanced racing cars, Group 6 prototype, changed drastically in 1967. Principally, the engine displacement was reduced to 3 liters maximum. In March 1968 Ford introduced their new car designated the P68, but commonly called the Ford 3L GT. The power plant and chassis was based on the Ford-Cosworth DFV 2993cc V8 Formula 1 car. Its first competitive appearance was at the April 7, 1968 BOAC 500Kms race at Brands Hatch, England. Of the two P68s entered, only one was able to qualify for the race. The car that did qualify developed mechanical problems while leading the race and failed to finish. Such was the case for the remainder of 1968 and into the 1969 racing season. Reliability problems kept the Ford 3L GT from qualifying or finishing a single race. The P68 program was obviously a failure and the program was cancelled. A beautiful, fast but troublesome car quickly faded into racing history.

Airfix has rereleased their 1969 Ford 3-liter GT kit as one of their “Starter Set” line of kits. This starter kit includes six small tubs of Humbrol acrylic paint in colors necessary to paint the car as she was in 1968. Also included in the kit are a number 1 and number 0 paintbrushes and a small tube of poly cement. The model itself is a fairly simple 1/32 model of this ill-fated racing car. The 53 parts come on four small light gray parts trees and one small clear parts tree. The body shell stands on its own. The parts are nicely molded, but do not exhibit the crisp and sharp detail of newer kits. There is no flashing to speak of and the mold lines are all but nonexistent. You will notice this kit has no engine, just the slightest hint of one seen through the rear window. Neither does it have a chassis to build as all this is hidden from view by the bottom pan and bodywork. The suspension pieces do show and they are very well represented albeit a bit on the robust side. The Spartan cockpit contains only a steering wheel, instrument panel and pedals. There is a set of rudimentary seats molded into the floor pan.

The instructions are clearly presented in multi-colored illustrations. The 14 steps are easy to follow. Basically this kit builds up in two major subassemblies – the lower body shell with its suspension and the upper body shell with its cockpit/engine. To simplify painting, I did not follow the step sequence shown in the instructions. I matched the upper body to the lower body with no other parts attached. This allowed me to paint without masking anything.

The parts went together in each subassembly practically trouble free. A slight bit of trimming was necessary to improve the fit of the window piece into the upper body shell. Building the four independent suspension systems slowed me down some due the parts’ small size and their location. At each corner the suspension is made up of five small pieces. The plastic tires mount very well onto the two-part wheels – three if you count the knock-off nuts.

Once the two subassemblies were completed, it was time to put them together. Because I had already painted the body I had to be very careful when applying the glue. It took a little force to hold the assemblies together until the glue set.

The decals and paint furnished in the kit represent the Ford 3L GT as it looked during the 1968 Brands Hatch race. The decals were easy to apply and snuggled down nicely. Just a word about painting is needed here. Since this kit came with glue, paint and brushes, I tried to use them in this review build. I brush painted the interior, wheels, and tires with the Humbrol paint and used the tube of glue to attach parts to other parts. However, I just couldn’t bring myself to brush paint the body, so I used Italian Red from a “rattle can”. Using that tube of glue and brushing the parts took me back to the mid-1950s when I first started modeling.

Overall this is a very simple kit and easy to build. This “Starter Set” makes a great kit for the beginning modeler and I highly recommend it for that market. However, it also provides other modelers the chance to build a very nice model of a fast racecar that just did not work out.

Thanks again to Airfix and IPMS/USA for the review sample.