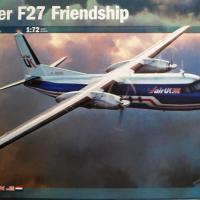 The twin-engine Fokker F-27 was designed during the fifties by the Dutch Aircraft Manufacturer to provide a successor to the old DC-3 that were still in service since the second world war. It was a great commercial success for airlines and military use.

The kit consists of 4 main sprues, very well molded with very little flash but a few large ejector pin marks on some parts. I decided that I would build the Air UK aircraft as I worked with Air UK in the past on a few projects interior projects.

Construction starts with the interior including the cockpit. The only issue here were a few ejector pin marks that needed cleaning up. The main floor was also a little bowed but was easily formed back to shape.

Continuing the interior the seats and small rear galley are added. I did add back panels to the seats as they were open. (They are not very visible when the fuselage is closed up but I wanted it to look a little better) The instructions say add the ten seats included but you can only install 9 with the galley. I also painted the seats dark blue as per pictures I found of the Air UK interior.

The windows are added next. The interior is now added to one side of the fuselage. A nose weight is needed to stop the plane being a tail dragger. The instructions show 5g, you need double that to make it sit on the front wheel correctly. The two fuselage halves are now joined. I did find it did not go together very well and was a little twisted. But with a lot of work and filler it closes up well.

The wings are assembled next with no real issues, except the slots for part 21a are a little large.

Now on two a few subassemblies - The main landing gear is first and there were a few pin marks and seams to be cleaned up. Then the two engines and lastly the rear stabilizers which were numbered incorrectly in the instructions but very easy to see which is right.

The above subassemblies and wings are attached to the Fuselage. The only issue I found during this stage was the engines when attached to the wings do have join gaps that need filling.

The landing gear doors are now added and some external details finish the kit off.

Then the painting of the aircraft and addition of the decals completed the build. The decals I found to be great and positioned and adhered very well indeed.

This was a very nice kit and was a fun build; I highly recommend it to all modelers.

Thanks go to MRC for providing this kit to review and IPMS USA for allowing me to review it for them.