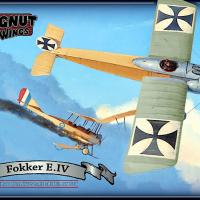 Built on the principle of more is better, the Fokker E. IV was an attempt to improve on the legendary aircraft responsible for the “Fokker scourge” of 1915. First was the addition of a twin row 14 cylinder Oberursel engine which developed 160 hp. Then, at least in the prototype, three IMG machine guns were installed on the upper cowl firing through the propeller arc via an interrupter gear (which didn’t always work). These improvements seemed better in theory but combat revealed some shortcomings. The guns were reduced to two Spandaus since three machine guns which were prone to failures overloaded pilots. In addition, the weight of guns/ammo combined with a spinning mass of engine up front proved a handful. The allies by this time were producing very maneuverable aircraft that a wing warping design simply couldn’t match. The Fokker Einedeckers domination of the skies over the front was over by December of 1916.

Everything you’ve heard about Wingnut Wings kits is true. One finds 168 parts all beautifully rendered in grey plastic. You get everything needed to produce the three gun prototype or the two gun production E. IVs. There’s a PE fret of 23 parts, a clear sprue of windscreens and a decal sheet done by Cartograf with five aircraft represented:

A new standard is set by the instruction booklet. This is a 31 page reference book of a quality that I’ve never seen in a model kit before. It contains a paint chart for three brands of paint, parts layout, full color step by step assembly instructions and extensive histories of the various aircraft represented on the decal sheet with period photos of the actual planes and pilots. I used it so much the binding staples gave out by the time I finished the model.

I used all of the colors called out in the paint guide but had to mix Testors, Tamiya and Humbrol brands since I couldn’t find all the shades under one label.

The cockpit is first up and it didn’t disappoint. There’s nothing missing detail wise but be careful as the assemblies are very delicate. I decided to add the internal rigging and later wished I hadn’t. I’ve read this elsewhere about Wingnuts kits that part tolerance is so precise, a coat of paint or some small rigging in this case can interfere with fit. This was the case when I attempted to enclose the cockpit in the fuselage halves. It forced the frame rails away from the sides. Since there’re not visible when everything is assembled,it wasn’t a problem. You might want to leave them off. If you are rigging the controls make sure you install these lines and run them outside as putting them in after would not be fun. I used 4lb test fishing line run over a black permanent marker.

The fuselage requires some modifications if you select the prototype version. Everything is clearly called out for each version so it’s not an issue. Next up are the upper cowl and the machine guns. You get a choice of solid molded machine guns or PE cooling jackets over guns with scale barrels. I choose to use the PE jackets. I rolled them over a section of tubing that matched the diameter needed. After airbrushing them with Alclad Gunmetal they were ready to install. A series of aluminum panels enclose the cockpit and cowl the engine. These panels were given a machine brushed finish on the real aircraft and the Wingnuts web site has a good tutorial on how duplicate this with paint.

The engine is next up and like everything else is exceptionally well done. The only addition, if you choose, is ignition wires that you have to provide. I used some old guitar string for that. The cowling mounts on an internal framework just like the real thing. The airframe is painted as you go since some of the areas are not as accessible once everything is in place. My advice is do not hurry any step. Take some time to determine what needs to be done and plan how you will do it. You’ll save yourself some hassle that way.

I decided to paint the overall airframe with Tamiya XF-60. The photographs in the instructions show that the castor oil used in these engines would leak back into the fuselage and permeate the fabric from the inside. These areas would appear as dark staining. I tried to preshade areas to show through the top coat. It didn’t turn out as I had hoped.

After a coat of Aqua Gloss from Alclad (great stuff) the airplane was ready for decals. I choose the E.IV of Kurt Student because I liked the cool headrest and rearview mirror which is in the photos of the real thing and in the kit parts. The decals work like everything else, you guessed it, perfectly. They come right off the sheet, are easy to position and lay right into the details.

Then came the part so many modelers dread, rigging. As I said before I used 4lb test fishing line. Some of those lines were installed from inside the fuselage and allowed to run out to terminate later. This was true for elevator and rudder cables and the wing warp cables from the bottom of the cockpit. After careful study of the instruction book (both the drawings and the photos) I devised a fairly simple plan and the rigging went very quickly. It helped that the control horns are big enough to drill a hole to pass the line through. I finished all that up with some dull coat to knock back the shine.

This is one of best kits I’ve ever built. Any issues that caused me problems were generally my own fault. My next Wingnut Wings kit will be much better given the lessons I learned building this one. If you don’t like WWI aircraft models because of the rigging, this is a great kit to start with. Even though the parts are in scale, they held up to my fumble fingered rigging.

Thanks to Wingnut Wings for making such a great kit and allowing me- through the IPMS review corps- to find out what all the Wingnut Wings hype is about. It’s all true!