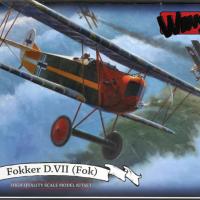 I had decided in the beginning to finish the model I was building in the markings of Fritz Oppenhorst’s Fokker D.VII 4301/18 (Option D in the kit’s painting guide), so I carefully followed the steps in the instructions to confirm which parts should be used in this build. WNW provides comprehensive information to guide the builder, but there are subtle differences between some of the parts, so it is important to double-check most steps to make certain the correct ones are clipped off the sprues. I found it helpful to remove only those parts I would need from the trees, clean up the attachment points (tagging parts if necessary with a piece of numbered masking tape) and bag everything in a zip-lock bag to avoid using any wrong parts down the road.

To continue the build, the wings and tailpieces were assembled, painted and decaled with no difficulty. WNW’s instructions to use a hair dryer to apply decals were followed with great success. I did find it necessary to puncture an occasional air blister in the decals along the rib lines and press them down after applying a dab of Gunze’s Mr. Mark Softener. All subassemblies were given a good spray of Future to seal decals and paint for eventual oil washes.

In my opinion, replicating a realistic laminated wood propeller is a necessary step in creating a focal point for most WWI aircraft. I airbrushed the propeller overall in a light tan color, masked it in the likely shapes and applied Dark Earth as a contrasting color for the laminations. After sealing everything with Future, I simulated the wood grain detail with W&N oils using a rake brush. When the oils had dried, I airbrushed the blades with a mix of orange and brown (2 to 1) with enough clear to create a glaze that enhanced the wood look and sealed everything with Future. When that had sufficiently dried the hub detail was added along with the manufacturer’s label decals...and a final coat of Future, which I buffed with a 6000-grit sanding pad.

Anyone who decides to finish their model in the markings for Fritz Oppenhorst;s Fokker D.VII 4301/18 will find, as I did, two decals (numbered 107 and 108) on the decal sheet that appear nowhere in the instructions. While decaling the model, I solved the mystery of where the go when I placed the stabilizer on the fuselage. It became obvious that decals 107 and 108 are to be applied on the underside of the stabilizer where it meets the fuselage sides to continue the centered black stripe that runs fore to aft.

The engine I had finished in part 1 was installed with little drama. Because of the rather complex way the engine, engine bay framing, and multi-part cowling align with the fuselage, I carefully dry-fitted cowl panels and held them in place with bits of Tamiya masking tape before applying cement to make sure there were no gaps between panel lines. Doing this also ensured that I had the front of the engine centered in the opening in the cowl front. I cemented the engine in place and then removed the engine panels to drill an access hole as called out in the instructions.

The twin Spandau Machine Guns came next in the build sequence. The kit includes parts to build the guns two ways; with and without photo-etched jackets. I chose to build mine with the photo-etched jackets so the guns would exhibit maximum detail. After annealing the cooling jackets, I rolled them around the cylinder provided in the kit (part D6) and followed WNW’s website hint to reheat the formed jackets and immerse them immediately in cold water to harden the brass and maintain the cylindrical shape.

In previous builds I found it challenging to align the Spandau’s jacket, position the faceplate over the protruding gun barrel with the gunsight ring aligned vertically, and attach everything as illustrated in the instructions. So I altered the assembly sequence. I first cut off the front of the gun barrels at the groove behind the muzzle ring. Then I positioned the faceplate on the rolled jacket, attached it with super glue, and attached the entire photo-etched unit to the gun body, making sure the front of the barrel protruded slightly through the slot at the bottom of the faceplate. I then reattached the muzzle to the front of the barrel and painted everything in a gunmetal color. It seemed to me to be a much easier way to get everything lined up and assembled.

After the guns were placed on their mounts, I added the empty belt chutes, checked the alignment of the flash guards over the engine (described 6 pages later in the instructions), adjusted the alignment as needed so they fell in place under the muzzles, and fit the bolt heads on the valve rocker cover. I believe it’s fair to say Wingnut Wings provides everything to build a highly detailed model and very detailed instructions to do so, but they place some information a little further in the instructions than might be expected. It’s important to read the instruction book thoroughly to avoid correcting or realigning (or repainting) something later in the build.

Assembling the landing gear was made easy by the kit’s slot and tab construction (remembering that those points must be cleared of any paint film). After cementing the struts to the sub wing, I placed them in their respective slots along the bottom of the fuselage and suspended the airframe so gravity kept everything in line as the glue dried. When that was dry, I firmly cemented the landing gear to the fuselage. Because of the true to scale thickness of the struts, the landing gear seemed to quiver a bit until I attached the cross rigging and tightened it up. After that, the landing gear was sturdy enough to support the completed model. I then attached the wheels.

The tail unit came next and I chose to position the elevators in a slightly deflected angle (read drooped). After attaching everything, I added the appropriate control cables and the stabilizer braces through the fin using monofilament.

I’ve found Wingnut Wings kits take a little longer to build than many other kits on the market but the time required to study and digest the comprehensive assembly instruction, pre-paint and decal most parts, clear attachment points of any paint film, dry fit and carefully align everything does pay off. The completed model is a striking replica of the actual aircraft.

Wingnut Wings deserves all of the praise they have received their series of Fokker D.VII kits. They provide a great model-building experience and build into impressive finished models. This kit is highly recommended. My thanks to Wingnut Wings for providing the review kit and IPMS/USA for permitting me to build and review it.