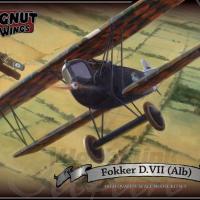 Arguably Germany’s premier fighter of World War I, the Fokker D.VII quickly won acceptance by its adoptive aircrews as it began to enter service in the summer of 1918. A well-balanced and stable gun platform with exceptional maneuverability and reliability, the D.VII demonstrated significant performance improvement over prior German types, including its famed older brother, the Fokker Dr.1 triplane.

In order to meet wartime demand, Fokker licensed production of the D.VII to Albatross. Albatross cranked out the D.VII at its Johannisthal (Alb) and Schneidemühl Ostdeutsche Albatros Werke (OAW) facilities. Multiple models were manufactured, incorporating running changes and three distinct powerplants – two of Mercedes origin and one from BMW.

Wingnut Wings’ release of the “Alb” variant does the legendary German fighter proud, in keeping with WNW’s reputation for top-rate 1/32 aircraft from “The Great War.” Molded in several sprues of light gray styrene, a sheet of crisp and malleable photo etch, several sheets of decals containing markings for 5 aircraft, and a full-color combo instruction/reference book make this D.VII a modeler’s dream – and a tremendous value for the asking price.

Pros: In a nutshell, the kit’s engineering is fabulous, with the parts virtually snapping together and need for filler kept to a bare minimum. The combined instruction book/reference guide is also a great feature, with reference photos beside assembly instructions. The Cartograf-printed decals are ample, colorful, well-printed, and super-thin. Engine, cockpit, and armament detail are all outstanding, and provisions are made to leave panels off to showcase the detail.

Cons: Assembly and painting sequence, especially for the cockpit and engine, is a bit unorthodox, as the detailed painting instructions are at the very end of each sequence, making access of some details difficult on the completed subassemblies. The gorgeous decals are brittle, adhering to the model surface very quickly and difficult to position. They can also be prone to forming large air pockets and tiny ridges when the MicroScale system is used in their application. The delicate and complex nature of the engine/cockpit module makes fitting the cowling tedious and prone to gaps between panel lines unless proper care is taken upstream to dry-fit all cowling parts prior to cementing the fuselage halves together.

Leading off with the cockpit, the build immediately dives into the well-detailed and often delicate cockpit and forward fuselage framework, fuel tank, ammunition magazine, and cockpit detail. Fit is fantastic, and assembly progresses quickly once the major subassemblies are pre-painted and assembled. Sometimes frustrating is the need to flip through the steps and pick up color references, pre-paint smaller parts, then assemble and touch-up, but the result is breathtaking. The PE detail for the seat belts, harness, and instrument faces is well-executed and fits perfectly. However, the lap belts require a great bit of care on installation, so as not to break loose the seat and mounting frames while conforming the belts to the seat contours. Full color references of a restoration D.VII cockpit are provided next to the assembly drawings.

Moving to the nose of the aircraft, the engine is next, and is equally-well-detailed and documented, drops into the forward fuselage framework shared with the cockpit, and then fits very snugly into the fuselage halves. A lesson to be learned here is to dry-fit the cockpit/engine bay into the fuselage halves, then tack on the cowling pieces with tape to ensure the cockpit/engine module is far enough back in the fuselage. This will hopefully help others avoid the noticeable gap between the front edge of the main fuselage and the back edge of the first panel ahead of it. I failed to do this, and realized far too late to effect corrective action.

Once all was buttoned up and minor filling done on the top seam, the fuselage was primed with a semi-gloss gray Floquil lacquer. Application of the large sections of lozenge decals was accomplished using the MicroScale System, but with unanticipated results. An inordinate amount of wrinkles, crinkles, and air bubbles still remained after 20+ hours of setting. Even after 2 more rounds of scoring, lancing, prodding, and follow-on applications of MicroSol (red label), some of the wrinkles and bubbles seem to migrate from one area to another, indicating poor uniformity of adhesion. I finally gave up after 3 rounds, just for the sake of getting the review done.

Assembly of the airfoil surfaces was quick and incident-free, although great care was exercised to prevent breaking the delicate elevator vertical stabilizer pieces. These surfaces were primed with Minwax Gloss Acrylic Clear, and decal results were notably better than those from the fuselage. Still, 3 passes with the blade and MicroSol were needed to subdue the beasts to my (near) satisfaction.

Attaching the undercarriage and wings was the best I’ve ever encountered on a multi-wing aircraft. The struts and their receiving holes on the wings and fuselage are precisely engineered with extremely tight tolerances and fit, making misalignment virtually impossible.

Once assembled and set, the entire aircraft was given spot touch-ups and a couple passes of acrylic flat to tone things down a bit. Fishing line was “Sharpied” black, cut, and added to aileron, rudder, and elevator horns to simulate control lines.

A beautiful work of modeling engineering, Wingnut Wings’ D.VII is neither for rookies, nor for timid intermediate skill level modelers, but rather for the advanced modeler looking for a box full of great model to build into an eye-catching replica straight out of the box.

That said, I highly recommend this kit for the advanced modeler wanting to add a state-of-the-art Fokker D.VII to his collection in 1/32 scale, and to the advanced monoplane modeler looking to break into large-scale multi-wing aircraft.

Thanks to Wingnut Wings for the review sample and to IPMS/USA for the opportunity to share my experience and thoughts on this build.