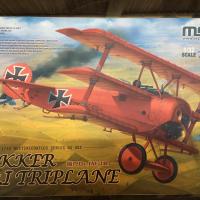 It has been 102 years since the end of WW1 and we still have a fascination with the daring young men and their flying machines. It is amazing that 11 years after the Wright brothers first flew, we had airplanes dogfighting over the battle-scarred fields in Europe. Some of those aircraft were simple single wing models that resembled kites, others were single seat bi-planes and 2 seat cockpits with a pilot and gunner and others were huge 100 + foot wingspan bombers. Then there were the Triplanes, England’s Sopwith came out with the first triplane and the German Fokker soon followed with their Dr-1, of which Manfred von Richtofen, also known as the Red Baron, had made his mount until he was killed in action on 21 April 1918

I am doing the review of the Meng Fokker Dr-1 of the plane that the Red Baron flew. The Meng Fokker Dr1 and the Roden Dr-1 are the only plastic models that you can get in 1/32 scale. Wingnut Wings was supposed to have been ready to release its version until the outbreak of Covid-19 hit and shut down the company. In their absence it looks as though Meng models had somehow acquired the molds from Wingnuts and so by a round-about way it was released.

When I received the kit the box art filled the whole front cover and looked rather good. Upon opening the box everything was neatly packed and the sprues were in six separate bags along with photo etch, decals, instruction book and a bag with three-hole punched cards with info on the Fokker Dr-1 in different languages. As I looked over the plastic runners the moldings looked particularly good with no sign of flash and almost unnoticeable mold lines. The clear parts look very good. The instruction book was not up to Wingnuts standards, I have done Wingnuts aircraft and their instruction books are much more detailed not to mention they have numerous original photos of the aircraft to look at.

There are four aircraft you can build with this kit. I started the build with the cockpit, of course, and everything went together well. Most of the parts are labeled as to what color they are to be painted, you also have to watch out for which version is being modeled, A, B, C or D. After getting the seat, seat belts, bulkhead, control column, rudder pedals, floor, gauges, and side walls painted and assembled, the cockpit is complete.

Next are the fuselage halves. Drilling holes is required, depending on which version you are building. There are only two holes you can drill in the bottom, but the instructions show four, two for the Dr-1 two for the F-1, also the holes for the tail control cables are the same two as for the Dr-1 and two for the F-1. After drilling the holes and painting the interior I installed the cockpit into the fuselage and glued everything up, and again things went together well. Next came the firewall and miscellaneous parts, handles, step, wooden strip for the bottom and some photo-etch parts. I left the tail skid off until the painting of the fuselage was done.

The tail feathers and wing assembly were next. There are two versions of the horizontal tailplanes and rudder depending on which version you are building. The middle wing section has a brace, part # A59, that attaches to the section of the cockpit area that is very vague on how it goes together. After fitting and fumbling with the part I finally figured out how it goes in, you will have to figure it out for yourself because I cannot explain how I did it. The struts for the wings get attached to the middle wing and then the whole assembly goes on the top of the fuselage. The lower wing attaches to the bottom of the fuselage and a center plate and wing skids also get put on. Now comes the fun part putting together the twin guns. I used the PE for the cooling jackets and sights. The PE has to be rolled into a tube and I used a small paint brush handle to do the job. I used my cutting mat and pushed down while rolling it back and forth over the PE until I got the tube I was looking for. After fitting and gluing with CA and a shot of gunmetal I had two very detailed guns. I installed per the instructions but had trouble with everything lining up parallel and even.

The next step had me a little confused. There are two different options for sights and instruments and looking over all the original pictures none of the parts provided were in any of the original photos. The only item I saw in the reference photos was a gun sight that looks like a telescope that mounts between the guns and that I saw on only a couple of aircraft. The other thing that I did not see in the reference photos was an anemometer that supposedly goes on the left upper wing strut. I left all that off for now.

Next is the upper wing and ailerons and main landing gear. I left the upper wing off until final assembly for painting purposes. The main tires are said to be painted black but doing some research I found an article that said the Germans did not use black in their tire compounds and the rubber was a natural color, it could be anything from almost white to pinkish to a grey color, so I painted mine grey.

The engine construction is a very simple task, not too many parts to it, but once done and painted it looks very good. The real engine is a German version of the LeRhone 9J called the Oberursel UrII, it is unique in that the engine actually turns with the propeller and called a rotary engine.

The final assembly has the main gear and struts attached and the engine with cowling installed. I did all of the pre painting before assembly. The propeller was a problem to paint, I was trying to get a wood, multi-layer look and just could not get it right, I re-painted it twice and finally decided to just put down a base coat of a light wood color and then with a paint brush streak it with a darker color brown, overall, it does not look too bad. I am thinking of buying a real wood aftermarket propeller to add more realism in the future. I added all the control lines using EZ Line and some very fine copper wire for the main gear struts.

Finally, I applied the decals of which there is a total of ten for this version. The decals were ok, I found them a little on the thick side but after many applications of Micro Sol they settled in nicely and looked good once dry.

In conclusion the model went together very well with no major problems. There were a couple of minor “fit” issues, but overall, very good. The only beef I have is that some of the instructions were not too clear and you have to double check where or what to do. Make sure you do your do your homework and look at historically accurate photos to get yours accurate. Happy modeling!

Many thanks to Meng for supplying the kit and to IPMS for the opportunity to do the review.