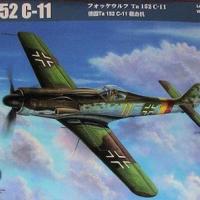 This kit consists of seven gray sprues, a clear sprue, a small PE fret, and decals for one plane, Yellow 11. The sprues are excellent – no flash, great panel lines, and the clear parts are very thin and clear.

Construction is straightforward and starts with the cockpit. The PE fret replaces the rudder pedals, and there is also the needed seatbelts already included. Decals are included for the instrument panel and the side panels. The cockpit looks great all painted and weathered.

One noticeable things about the Fw-190D series or later is that the rear of the engine is visible through the wheel well. Hobby Boss has added an entire rear engine made of 11 pieces that slots right in and gives the appearance of a whole engine. The only issue here is there is no other structure but the engine rear, and a purist would want to add some lines and stringers. The tail wheel was also prepared and all three parts closed in the fuselage. Fit is excellent with only minor filling and sanding.

Watch when you add top of the fuselage – there are two choices. You can leave the exhaust off to ease painting. The rear deck behind the cockpit comes in plastic but also in PE. I used the plastic as the PE and plastic looked similar. I added the windscreen and it fit with no filler.

The wings have a large spar in them and it forms the rear of the wheel wells. The remainder of the wheel wells were added and the wings closed. Again, no fit issues. The flaps and ailerons are separate. I posed the flaps down and there are a few ejector pin marks on the wings and flaps and no framing, but it does add interest to the model. The wings were added and the fit is also excellent, requiring only a little filler at the front.

The wheels and landing gear struts were built and left off. The canopy was masked and I was ready for paint. The paint call out is listed on a full color second sheet. The bottom calls for RLM76, while the top calls for RLM81/82. I varied here and stole a scheme off of the D-9. I used RLM 80/81.

The decals were good and stenciling was included. I did have trouble with the dashed wing walks wanting to fold over, and in the end they became useless. I recommend cutting them in smaller runs and letting them dry completely and adding them in order. I glosscoated and did the panel lines with a diluted black oil wash, followed by flat coat and a light pastel weathering. Another flat coat followed, and I added the antennas, canopy, landing gear, and gear doors.

This is a great little kit of a paper project and should appeal to Luftwaffe fans, Luft ’46 fans, and all fans of the Fw-190/Ta-152 series. Recommended. My thanks to Squadron for the review sample, to Hobby Boss for producing the kit, and to IPMS/USA for providing it for review.