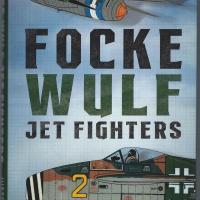 Justo Miranda is well known for his books on Luftwaffe paper projects and designs, having published many soft cover and hard cover books on these subjects. His background as a tech drawer and advisor to the Spanish Air Force Museum have aided in the quality of his books.

This book covers the jet fighter designs of Kurt Tank and Focke-Wulf. It is divided into 29 chapters covering the jet designs that were proposed in WWII and beyond by the company and Mr. Tank.

Focke Wulf, producers of the superb Fw-190 and its derivatives were probably “saved” by their decision to go with a radial engine design thus not being in direct competition with the favored Messerschmitt Company for inline engines since by winning the 1936 fighter competition meant it had first priority for advanced inline engines.

These early designs were similar to those of Messerschmitt and Reggiane and the influence of these are readily apparent when looking the Soviet production designs of the Yak 15, 17 and 23. The design of the Jager project IV independently used the same aerodynamic solutions that De Havilland had in the design of the Vampire.

Throughout this book are the many fine drawings of these proposed aircraft. All covered in detail from the Ta-183 design whose influence can be seen in the SAAB J-29 Tunan and the Mig-15 to the more radical Ta-283 and Triebflugeljager. All the while there are comparison drawings of allied designs of similar nature such as the forward swept wing P-51, XP-83 and XF-88.

The final chapters cover Tank’s post war designs for Argentina; the IAe 33 Pulqui II and for India; the Hindustan HF-24 Marut. The very last chapter discusses “Russian Fakes” or more appropriately Western aircraft and model manufacturer’s speculation as to what the latest Soviet fighters looked like since there was little information coming from behind the Iron Curtain. This lack of information lead to these entities drawing upon many of the Luftwaffe paper projects for inspiration.

This is a good read. Many interesting drawings are within these pages all to please both the historian and the modeler. There is good information here to build your Amtech Ta-183 or ARBA Ta-283 as well as to scratchbuild many other Luftwaffe ’46 aircraft. If you have an interest in the many advanced designs Germany came up with in WWII you will like this book. The vast amount of quality drawings alone are worth the price