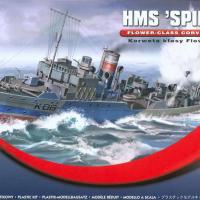 This kit comes to us from Mirage Models out of Poland and is the third boxing of this type of ship, the other two kits in the series being the HMS Anchusa and the HMS Zinnia. The kit itself is molded in a medium gray and consists of three sprues marked A,B,E (more on this in the review). The sprue connection points are a bit thicker than on a Revell or Tamyia kit, but are fairly easy to cut through with a number 11 blade or a breeze for a razor saw. The kit also gives you photoetch railings and main mast ladder and a small decal sheet with the ID numbers for the boat and a British Naval Flag for the rear flagstaff.

This is my first ship model in probably 25 years but I thought it would be a good kit to try to get back into the ship arena. Not overly large or a lot of pieces and from the photos I had seen of other builds it would build up into a nice little ship. It was interesting to research and I found that ships and their camouflage patterns changed as much and as often, if not more so, than the aircraft I was used to building.

The build starts by gluing the two halves of the hull together along with the rear deck and deckhouse. Once this is dry the forward decking rear deckhouse roof are attached. Step two calls for the photo etch railings to be added on the rear deckhouse but I held off to the end of the build for this so as to not damage them during the rest of the build.

The next few steps involve building the depth charge racks, attaching individual depth charges, and various other fiddly bits. These “fiddly bits” include a crane, bollards, the rear flagstaff, and various hatches. It was here where I found my first error in the directions. The rear crane call out is for part C82, there is no C Sprue! The closest match to this part is the lifeboat davits, of which they give you 6. In the end I used one of them for this rear crane and from afar you won’t notice the difference. The second error was part B83. They are two stanchions that go near the rear deck house. They did not seem to exist on the B Sprue. I kept looking until the very last part was removed and never found them. In 1/350 scale though they are nearly microscopic, when building this kit magnifiers and good tweezers are a must!

As the build continues you then add the rear gun tub on top of the rear deckhouse and added in some side pieces that cover the forward depth charge launchers. The gun that goes into the tub is very small and opening the barrel nearly impossible. When painted though the gun is a nice representation and looks good. The final step for the rear portion of the boat is to add all of the vents, funnels, davits, winches, etc. to the top of the rear deck house. Some of the parts in step 10 have already been added in earlier steps so it can be confusing. In step 10 I found another missing piece. They tell you to add part e53 twice but on my sprue there was only one e53. It’s not a very noticeable piece so it won’t look strange if you only have one of the two.

Steps 11 and 12 have you adding the center deckhouse, photoetch railings, single funnel, and various air intakes. All of this is straight forward but you may have to fill a seam or two on the funnel. Also the funnel is a bit raked so make sure when you attach it correctly so that it has a slight reward lean. These parts go together easily but it can become difficult placing them because of some very tight spaces. Steps 13-18 have you build both levels of the forward deckhouse, add the main lifeboats and davits, upper deck and supports, upper deckhouse, and main mast along with all the little parts like the engine telegraphs and searchlight. Again some parts are shown in multiple steps (especially in the mid deck air intakes and life boat davits). My recommendation is to complete an area and then move forward. This way you don’t need to go back and try and add in a lifeboat or air intake in a very congested area.

Steps 19-24 are for the forward deck. It starts with adding the main gun support and armor sides and moves on to adding the main gun and gun shield, and lots of small parts especially in step 24. You add winches, anchors, anchor which, davits, bollards, stanchions, spare anchor and lots of other really small parts all ripe for feeding the “carpet monster” these steps require lots of patience, a steady hand, good tweezers, and a magnifier. The last step is to attach the ship to the base if you so desire.

This model took me almost 3 months to build. Most of this time was taken up by waiting for the paint to arrive. During my research before starting the model I found that White Ensign out of England made the perfect colors I needed for a Royal Navy boat from mid World War 2. It was at this same time unannounced to me, my local hobby shop in Elmhurst IL closed with no warning, and I was left in a lurch as I had nowhere to go to get the paint. I ended up having to mail order the 4 colors I needed and this was problematic as they all were on backorder or out of stock from nearly every place I could find. It took almost 2 months to finally receive the paint. One last error I found was that Pb10 is called for as one option for the blue color in the first camouflage pattern. After a lot of research and internet searching I found that Pb10 was used on Mediterranean theater submarines and not on Atlantic convoy ships. MS1 is the proper blue to use for the camouflage and is a choice on the second scheme option, but if you did use Pb10 I’m not sure anyone would notice. Once the paint arrived I was able to paint from the hull up, and a lot of pre painting while the parts were on the sprue. This method seemed to work well and touching up the parts once on the boat was pretty easy to do. The decals went on with a little gloss coat and decal set and settled down nicely.

After the model was built and painted, I painted and added the photoetch railings. Looking back I probably would of added the mid deck railings around the funnel when the kit called for them as this area is very tight and hard to get to. The rest of the railings and ladder went on easily with a bit of superglue and an accelerator kick. They really do add a bit of depth to the kit and help to finish it off. Rigging was done via EZ Line and superglue to get the lines to attach fast. There is a rigging diagram on the paint sheet and it was very helpful.

Overall this kit is very good and will build up into a nice representation of a Flower Class Corvette. It gave me a nice break from my usual modeling subjects of World War Two aircraft. It’s not for a beginner though but as long as you have some basic modeling skills behind you it should not be too difficult of a build. Just remember to double check each piece to make sure it’s not in a different location or mislabeled. I know I will build ships again because of it and look forward to the next one. Maybe 1/350 HMS Hood or Bismarck?

It has been my privilege to review this kit and I want to thank Stevens International, Mirage, and IPMS for this opportunity.