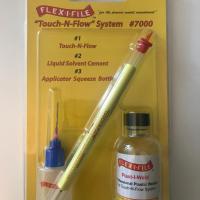 The Flex-I-File “Touch-N-Flow” (Photo 1) is the ultimate capillary action gluing system. Nothing else I know can get cement into hard to reach spots with such accuracy. It enables a modeler to put solvent cement exactly where needed, with very little chance of missing the target and marring an outside surface.

The #7000 system is composed of three components (Photo 2): A bottle of thin Plast-I-Weld solvent cement, a squeeze bottle, the Touch-N-Flow applicator, along with an instruction sheet. The Touch-N-Flow is a thin glass tube with a very fine needle applicator at one end. The squeeze bottle is used to pull the thin solvent cement up into the tube. Once the cement is in the applicator, a touch of the end of the needle releases cement.

You hold the applicator at an angle and “touch” the needle tip to the point where you want the cement. As shown in Photo 4, I tested using the Touch-N-Flow to cement a tab on the back of a Monogram Devastator pilot’s seat to the shelf behind it instead of putting glue on the part first, just to see how easy it could be. It is actually faster once the applicator is loaded to use the Touch-N-Flow since you don’t need to open then close a bottle or tube to apply the glue, the solvent cement is faster drying than tube glue, and there is no chance of spillage or putting too much glue on the part and making a messy joint. And it is easier to reach tight spaces with the long applicator than with a conventional tube or brush applicator.

For long joints like fuselage halves, you drag the tip of the applicator across the joint, leaving a nice even bead. When the cement is applied with a slight separation, the fuselage halves can be compressed, and the resulting bead can be sanded down to leave a smooth joint.

Care must be taken in use and handling of the Touch-N-Flow applicator. Note that you must always draw the needle across the seam, not push it against the plastic, an action that could cause melted plastic to plug the fine needle opening. Should the needle become clogged, it is recommended to soak it in the solvent cement for 5 or 10 minutes to dissolve away any plastic that might clog the tip. Also, while the applicator appears to be made of a tough glass like Pyrex, it is still glass and might not survive a drop onto a hard floor. Use of the special stand, Flex-I-File #720 (see Photo 5) to stage it close by but not in the immediate work zone, is handy for this purpose.

For the capillary action of the needle to work as it does with low viscosity solvent cements, it must be very thin (I estimate 26 gauge) with a near-microscopic opening. The small opening in the needle requires that the seal around the glass tube, provided by the plastic squeeze bottle, be tight (no air leakage) to create enough continuous negative pressure to draw in the solvent. Eyedropper and ear syringe type bulbs are thus ineffective for filling the glass tube.

The three items in this set can be purchased separately should loss or breakage occur or if cement replacement be required. I haven’t tried them, but I would think that Micro Mark Same Stuff, Tenax, Ambroid, and Plastruct solvent cements should work with the Touch-N-Flow applicator.

I rate this product highly.

Note that all Flex-I-File products can be found in a 14-page catalogue at alphaabrasives.com website.

Photo 5: Flex-I-File #720 Fill-N-Clean base is best way to keep the applicator handy when in use. There is a #721 that holds the cement bottle also.
Previous Next