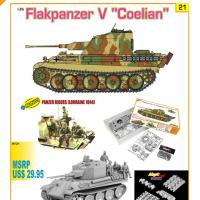 So what’s better than a 37mm FlaK 43? How about twin FlaK 43s. And how about mounting them in an enclosed, armored turret and mounting them to an armored chassis? In 1943, the German military contractor Rheinmetall-Borsig started designing the Flakpanzer 341 to be just that, an armored, mobile twin 37mm air defense platform. Commonly referred to as the Coelian [Flakpanzer V], the vehicle mounted twin FlaK 43’s in a powered turret which featured the ability to fire near vertical. The turret found itself mounted to a Panther chassis that had been slightly modified. Although the Coelian never made it past a wooden mockup [on actual Panther chassis], several experts over the years have speculated that the design would not have been effective due to the enclosed turret. Many believe that the turret design did not properly allow for the exhaust gasses from the twin 37mm guns to vent.

Several years ago, Dragon released a decent kit of the Coelian, featuring a modified Panther D chassis. While the kit was good for the time, it still left some desire with certain parts. Fast forward to the present, and Cyber-Hobby has taken the Dragon Coelian and re-boxed it as part of the Orange-Box Value line. Adding in Dragon Magic Tracks, and pairing the Coelian with Dragon’s Panzer Riders figure set, the new boxing of the Coelian is much better than the original. Having already had the original Dragon kit in the stockpile, I compared the two kits and happily noted that the Cyber-Hobby offering has crisper detail, suggesting that the molds may have been cleaned up, if not redone, before the re-issue. The addition of the Magic Tracks is great, as the original kit came with individual tracks on a sprue, which required quite a bit of clean up. The kit also includes the Panzer Rider figures, which Dragon engineered specifically for the engine deck of the Panther. While these figures work great on a standard Panther, the Coelian kit does have a few changes to the engine deck, and a slightly larger turret. The figures do, however, still work with the Coelian. The new offering also includes Cyber-Hobby’s standard smaller Orange Box instruction sheet, with all new color profiles for two different schemes [original Dragon camo scheme as well as a prototype scheme].

Instruction of the kit is very simple. Anyone who has ever built one of the Dragon Panther’s will easily work through the hull construction. The turret is also easily constructed in a box-like fashion, with the gun assembly sitting in a cradle to allow for elevation movement [this is rather loose, so I recommend gluing]. One of the down falls of the kit, which I would have like to have seen redone for the Cyber-Hobby re-box, is the 37mm gun barrels. They are molded solid, and will require VERY careful drilling out, as well as drilling for the numerous holes on the flash suppressors. I think these would have looked better in slide-molded new parts, however if you don’t want to risk damage by drilling them out, there are some very nice metal aftermarket barrels available. I opted for drilling them out, going very slow and checking the progress often to avoid damage. I also added some wedding veil to the engine grills to simulate the protective mesh, as well as adding a length of small twisted wire to the spool on the right side of the tank [15mm cable was used for track replacement]. The tracks went together fairly easily, and once glued, were put in place on the model to dry, before removing them for paint.

I had decided early on that I wanted a late prototype paint scheme. The kit shows a scheme with dunkelgelb hull, with primer red turret. I modified this going instead with a full camouflaged hull and primer turret. I decided to weather the hull heavily to represent a vehicle that had been well used, and then brought in, hosed off, and modified for the Coelian. The camouflage was applied using Tamiya Dark Yellow, NATO green and red brown. It then received an overspray of dark yellow mixed 20-30% with white. Heavy rust staining and chipping was then added all over the hull along with various washes. The underside of the hull and backside of the wheels we also caked with weathering pigments to simulate where it would have stayed after the vehicle was quickly washed off. Finally, the engine deck received extra dirt and rust, along with some oil and grease stains from Life Color. The turret was treated to red oxide primer [$.98 Color Place spray paint from Wal-Mart]. After a wash, it also received some rust weathering, but not as heavily. I had seen in the past where vehicles still in primer had white chalk markings on them in the factories. I represented this with white PrismaColor pencil. The turret number is Nr 1 [first Coelian produced] and for the date I decided to add a bit of humor mixed with some “truth”. See if you can figure it out.

Overall, I am extremely pleased with how the Coelian came out. So much so, that I have commenced building the other kit I had [with full PE set and resin turret]. I highly recommend this kit as an addition to your WWII collection. And I think it looks very good next to the SWS or the Sd.Kfz. 251 half-tracks with the infrared searchlight. My thanks to Dragon USA and IPMS/USA for providing the review sample.