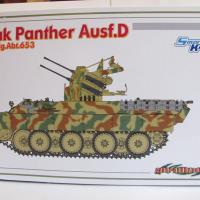 I could not find very much information on this vehicle since it was a one-off field conversion. It was part of the HQ Company of the s.Pz.Jg. Abt. 653 during the battle of Kursk and it appears that this vehicle survived until at least summer of 1944, but I could not confirm that.

This is a kit of the Panther D as a Befehlspanzer or command tank from DML’s Cyberhobby line. The kit comes as a smart kit and is loaded as usual with a boat load of extra parts. And correctly for an early D, it does not have Zimmerit coating since this wasn’t applied to tanks until September of 1943. The kit contains the following:

As is common practice for Dragon, this kit is also a mix and match of previously released kits; mainly Panther D and A with the gun coming from the SdKfz 7/1.

The assembly of the model was straightforward and didn’t present any surprises. All parts fit very well and no seams needed filling.

As always the assembly starts out with the lower hull and the fabrication of the suspension and running gear. Even though torsion bars are provided from the Panther A, only swing arms are used. I left the wheels off until the hull was completed.

Next I built up the rear end plate of the hull. The instructions call out to use P/E brackets for the lift jack with no plastic alternative. I left the jack off since I had parts of the bracket break. I also opted for the plastic brackets for the spare tracks since the P/E brackets appeared to be too thin for the scale.

The upper hull came next. It started out with the clear periscopes for the driver and radio operator. This kit also comes with a nicely detailed MG34 which actually has the recoil spring molded into it. The muzzle is also slide molded. I masked the periscopes with Walther’s Magic Mask prior to assembly. This was followed by the vision covers for the MG and the driver. After that, I installed the driver and radio operator hatches, as well as the periscope covers and other small bits and pieces. The next step was the sponson covers.

Before I started on the pioneer tools, I glued the guide horns to the spare track links. The pioneer tools were next, followed by the engine grills and engine hatches. The final step for the hull assembly covers the attachment of the side skirts and their brackets, as well as combining the upper and lower hull. Unfortunately the instructions don’t indicate how the lower and upper hull is to be joined together. And even after conferring with fellow modelers, none had really an idea except maybe trying to attach the sponson covers to the lower hull first and then glue the upper hull on.

The next 2 steps cover the assembly of the 20mm AA quad gun. Again this is a straight forward process. The assembly starts out with the gun sight. I recommend leaving the gunsight off until you are ready to attach part A45, because this is the link between the gun sight and the carriage. The gun shield requires some surgery that is called out in the instructions. The final step for the gun assembly is the four 20mm barrels which are also slide molded with a hollow muzzle.

The last step left is attaching the gun to hull, and that’s it.

Unfortunately there is no interior provided and with the open turret ring there is a lot of emptiness.

After priming the model with Tamiya grey primer, I gave it a coat of Tamiya XF-60 Dark Yellow. The camouflage spots were airbrushed free-hand with Tamiya XF-64 Red Brown and Xf-67 NATO Green. After a coat of Future, I applied the 2 decals and gave the model a light pin wash with oils. After that I flat coated and applied some Bragdon Powders for a light weathering effect. I painted the tracks in Tamiya XF-56 Grey Metallic followed by XF-52 Flat Earth. Next I weathered the tracks with Bragdon Powder Rust and Dust.

This is another interesting kit from Dragon of a one-off vehicle. Any modeler with a few armor models under their belt should have no problems with this kit. The assembly process is straight forward and doesn’t contain any big surprises. I can highly recommend this kit to any armor modeler.

I would like to thank DragonModelsUSA for this review kit.

Completed kit, from front left side

Completed kit, from aft left side