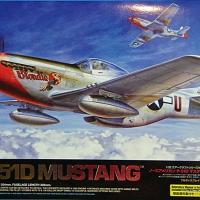 Considered by many to be the finest piston-engined fighter aircraft ever to take to the skies, the P-51 Mustang is legendary among aviation aficionados and modelers alike, and needs little introduction in this “first look” at Tamiya’s exquisite rendition of the defining Mustang variant, the P-51D.

Riding on the tremendous popularity of its 1/32 Scale Aircraft series thus far, Tamiya once again ups the ante with the introduction of the P-51 series. As with their Zeros, Phantoms, and Spitfires, Tamiya has clearly engineered their tooling to crank out Mustang variants other than just the “-D.”

Upon completion of the Spitfire Mk. XVIe a few weeks ago I seriously questioned if those show-off engineers and toolmakers at Tamiya could top the Spitfire series. Well, they may have done just that. Although I’ve had the kit for barely 8 hours, it’s clear the engineering and layout of the kit bears much resemblance to that of the “Spit.” Here’s a breakdown of what’s in the box:

The first 6 assembly steps focus on the powerplant. The Merlin, apparently borrowing tooling from the Spitfire and adding some Mustang-specific parts, is nothing shy of outstanding. After a brief diversion to the cockpit and fuselage assembly, engine oil and cooling assembly wraps up in only 5 more simple steps.

The cockpit is also a model unto itself with 12 steps of gray and clear styrene, photo-etch, and decals. The molded detail is crisp and appears accurate against references. Options for 3 instrument panels, 2 seats, and 2 gunsights are offered. A seated pilot option is also included.

Fuselage assembly accommodates selection of either early or later style tails, and spans 5 steps, to include integration of engine, cockpit, and radiator sub-assemblies. Surface detail is fine – almost sublime in places. Absolutely gorgeous! Not really sure where all the web forum flap about exaggerated rivet detail originated, but it’s dead wrong. Fuselage and wing rivet detail is spot-on.

All control surfaces are hinged and positionable. Looks like 8 steps in all to assemble and integrate ruder, elevators, ailerons, and landing flaps. Early (fabric-covered) and late (metal covered) elevator options are included.

Construction and integration of external fuel tanks, gun bay doors, prop, canopy, engine cowling, and other fiddly bits account for the remainder of the build. As with the Spitfire, the removable engine cowl panels are apparently molded to scale thickness, and are attached by magnets built into the engine and airframe.

Decals appear to be typical of other Tamiya offerings, and of good color and register. As noted earlier, markings for 3 aircraft are included.

All said, I eagerly await this build, and am starting to sense the expectation that the satisfaction of this one may actually surpass that of the Tamiya Spitfire. Time will tell -- please stay tuned to this website for progress reports.

My sincere thanks to the good folks at Tamiya USA for providing this sample kit and to the IPMS Reviewer Corps Commandant for entrusting me with the build and review.