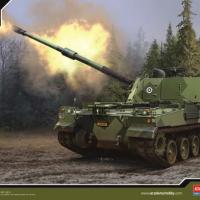 I didn’t know this when I started working on this review model, but the K9 is NOT an indigenous design from Finland, but is a South Korean design intended to replace their aging M109 self-propelled howitzers. Finland has a long history of buying military equipment from abroad and making it their own, and this is a good example. First operational in South Korea in 1999, it was picked up by Finland shortly thereafter. Capable of hurling a 155mm shell some 50+ miles, it certainly has proven to be an upgrade from Finland’s older SP artillery types.

Academy’s release of this kit came as something of a surprise to this reviewer. What – no photoetch? No clear plastic vision blocks? No resin upgrades – not even individual track links? What Academy offers here is a sort of “classic” plastic model without the bells and whistles – a simple, relatively easy-to-build kit with rubber-band type treads. It even comes with motorization holes in the hull and alternative parts for that version – something I haven’t seen in a new kit in years. Oddly, though, it was kind of a relief to tackle a straight-forward, old-fashioned kit like this for a change, and I really did find it a pleasure to assemble.

That being said, be aware that there is a certain “looseness” to a lot of the parts fit. This was particularly noticeable on the running gear arms, which had enough play that if you’re not careful, you’re going to wind up with unexpected results. Because of the single piece tracks, I opted for the maximum extension on the bogey arms, and even so, there’s a certain slack on the tracks which is noticeable when the model is picked up, although it doesn’t affect the look under other circumstances. Just be sure to take your time lining things up.

As I said before, this is a relatively simple kit so assembly went quickly. Hull parts went together smoothly enough that only a dab of filler was needed around the rear end. The turret is another smooth assembly, and literally, every crew access hatch is separate, which means this kit is just begging for some after-market interior bits to fill it out. Almost none of the hatches feature any interior detail, however, so a certain amount of modeling scratch jiggery might come in handy detailing these out if you elect to have them open.

Detail-wise, there were just a few small details I added or swapped out on. The jerry cans on the side of the turret looked a bit anemic, so these were replaced by spares. I added some wire to the rear cable drum as well. The supplied entrenching tools have virtually no clamps or tie-downs, so these were added with a bit of lead strip so they wouldn’t just miraculously hang off the side of the turret.

Speaking of such, I elected to do this project in a few subassemblies to help with the complex masking job necessary to produce the lovely Finnish splinter pattern, including the main gun, jerry cans, command cupola, tools and a few other bits that would simply get in the way. I don’t normally assemble an armor kit in this fashion, but in this circumstance, it helped with the finishing process immensely. As a side note, you’ll find that the real-life painters of these vehicles clearly don’t like masking over complex shapes any more than your average modeler does, and the pattern used shows this. Start with the lightest color, and by and large, you won’t be stuck having to wrap tape around elaborate surface detail.

There are a small number of parts which have to be glued together and then sanded, these mostly being parts of the gun barrel assembly. However, Academy does take a small leap into the 21st century by supplying a couple of slide-molded parts, including the complex muzzle brake. You’ll want to take your time with this particular assembly as well, ensuring that the barrel parts all line up straight and true. I didn’t discover that the muzzle brake was mounted crooked until the entire kit was assembled and painted, and I had to saw it off and straighten it after the fact. Like I said, there’s a fair amount of play in a lot of the parts.

There are three crew members supplied with the kit, of which there is no mention whatsoever in the instructions. I presume these were supposed to be for the original South Korean version of the kit, but with just a little fiddling they’re perfectly adequate as a Finnish crew. I went ahead and assembled and painted them as well, just for fun.

Well, the end results speak for themselves. This is one of the simpler armor projects I’ve tackled lately, and yet the end result is distinctive and really stands out in my collection. There are no real vices to this kit, and with a bit of patience and perseverance, any modeler of average skills can add this unique beastie to his collection. Highly recommended.

My thanks to IPMS/USA for letting me tackle this one and to Academy/MRC for releasing such a simple, fun build as this one turned out to be.

Finished model of Moukari
Previous Next