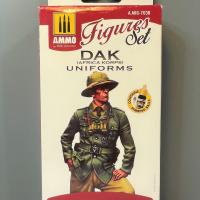 Ammo By MIG’s new paint set “DAK (Africa Korps) Uniforms” includes six 17ml bottles of water-based acrylics. Each bottle has a steel ball inside to speed up the mixing of the paint when shaking the bottle. The colors included are: Dark Olive Green F-503, Pale Yellow Green F-505, Field Grey Shadow F-514, Dark Brown F-533, Italian Green Camo F-535, and Ochre Brown F-546 (photo-1). These colors are intended for painting German World War Two tropical army uniforms as worn by the Deutsches Afrikakorps (DAK). After the German surrender in North Africa these same uniforms were authorized for summer use in southern Europe, so the modeler can put these paints to use on more subjects than the label would suggest. The paints come packaged in a small paper box illustrated with a miniature of a grumpy-looking DAK officer to serve as a painting example (photo-2). The back of the box has a color key to illustrate which paints were used for each item of clothing (photo-3). I didn’t find this color key very useful. The color boxes are very small, and the printing process used to make the box doesn’t show much difference between several of the colors. I made a test palette for myself and photographed it in natural light against a photographer’s 18% gray card (photo-4).

I experimented with these paints by airbrushing and painting by hand. I’ve done most of my airbrushing with acrylic lacquers such as Tamiya and AK Real Colors. These AMMO paints are water-based acrylics and require different techniques to get good results. I found that thinned with about 40% AMMO’s Acrylic Thinner (not included in this set A.MIG-2000) these paints will spray well in light misting coats. Attempts to spray wet coats will often result in orange peel and a glossy finish. When I tried to spray very fine lines I had problems with tip-dry after a few minutes of spraying. If you are not used to spraying water-based acrylics (like me) put in a little practice time on a paint mule before taking aim at your project. My bottom line for airbrushing these paints: now that I’ve had some practice, I wouldn’t hesitate to airbrush these paints for my base colors. For places where I want to spray a very fine line, they wouldn’t be my first choice.

Brush painting these colors went very well. The paints have a good density of pigment and cover well even when thinned. The paints work best over a matt primer, painting over gloss paint or bare plastic will look streaky and may have poor adhesion. I thinned the paints with tap water and MIG’s acrylic thinner and didn’t notice much difference. MIG’s paint retarder (not included in this set AMMO F-500) can help keep a fine brush tip from drying out too quickly but isn’t strictly necessary. Strangely, when I used the paint retarder on a wet palette it caused the paint to clot after a few minutes, but the retarder worked fine in a paint cup. Glazes can be made by making very thin mixes with either water or MIG’s Transparator (not included in this set A.MIG-2016). The Transparator lets you make a thinner glaze without the tide marks you can get from overthinning with water.

For my painting tests I used some 1/35th scale figures from Tamiya and Dragon. For my painting reference I used Osprey’s “The German Army 1939– 45 (2) North Africa & Balkans” by Nigel Thomas and Illustrated by Stephen Andrew. Mr. Thomas notes that the DAK uniforms were cotton and the specified color was a “light olive” that resembled olive drab or khaki. Study of period photographs shows that the uniforms could be dark when new but faded in the harsh climate. Often items such as hats could and would fade to an almost white color. Officers could have uniform items tailored from French or Italian sources resulting in even more variety. The finished figures were photographed in front of a photographer’s 18% grey card.

The Tamiya tank commander and loader (photo-5) have shirts painted with Dark Olive Green F-503. Field Grey Shadow F-514 and Pale Yellow Green F-505 were mixed into the Dark Olive Green for shadows and highlights. I had originally painted the pants of Tamiya tank commander with Pale Yellow Green to represent fabric faded from a darker olive, but once on the figure the yellowness of the paint looked too saturated. Since nobody likes saturated pants, I mixed in some Field Grey Shadow and that killed the saturation of the yellow. I found that two parts Pale Yellow Green mixed with one part Field Grey Shadow made a nice tan color with a hint of green to it. I also used this mix as the base color for the Tamiya driver and gunner (photo-6). Shadows were made by increasing the proportion of F-514. For highlights I cut back on the Field Grey Shadow and added a little white.

The Dragon figure of the trooper in the tropical greatcoat (photo-9) was painted with a basecoat of Ochre Brown F-546. Shadows and highlights were achieved by mixing in Dark Brown F-533 and Pale Yellow Green. The tropical greatcoat was the one tropical uniform item that was not issued in “light olive” fabric. The Dark Brown is a useful color for deep shadows on just about any of the other colors. The Dark Brown, Ochre Brown, and Pale Yellow green were useful for making various brown leather colors by mixing with each other in various ratios.