Fighting In the Sky 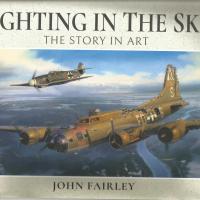 Barely a decade passed from the Wright Brothers’ first powered flight to aircraft becoming lethal instruments of war. The Royal Flying Corps and Royal Naval Air Service took off in the very early days of The Great War and captured the public’s imagination and admiration.

Sydney and Richard Carline happened to be both pilots and artists as was Frenchman Henri Farre. Their works inspired celebrated painters like Sir John Lavery who took to the skies in an airship in the First World War. Feeding on the demand for works depicting this new dimension of warfighting, a new genre of art was born which has remained popular ever since.

During the Second World War, the paintings of Paul Nash stood out as did Eric Ravilions who, ironically, died in an air crash. War artist Albert Richards dropped with British paratroopers on D-Day. Post-war, paintings by leading British and international artists graphically illustrate conflicts such as the Falklands, Bosnia, and the Gulf War.

John Fairley has brought together a dazzling collection of art works covering over 100 years of air warfare, enhanced by lively and informative text. The result is a book that is visually and historically satisfying.

John Fairley is the author of “Horses of the Great War”, “Heartbreak and Beyond”, and “The Armistice and the Aftermath”, all published by Pen and Sword Books. A noted documentary and sports television producer, he was Managing Director of Yorkshire Television. He is the author of “The Monocled Mutineer”, which became a celebrated BBC television series. Born in Liverpool, he served as an RNVR officer aboard the aircraft carrier HMS Albion in the Mediterranean. A scholar of The Queen’s College, Oxford, he is married with three daughters and lives in the Yorkshire town of Malton.

The first World War was the 1st conflict in which aircraft played a role. Almost 10 years after Orville and Wilbur Wright made history by flying 120 feet in 12 seconds, World War 1 began. A new weapon quickly became a significant resource for military operations and caught the attention of the public like no previous technological advance had done. Aircraft quickly evolved from “observation platforms” into “fighting platforms”, not only tracking and attacking men and targets of the ground, but also into a weapon that would change the nature of combat in future wars.

John Fairley traces this evolutionary change through the presentation of artwork, some created by artists during actual flight and aerial combat, accompanied with an excellent text that describes the experience of the artists on those missions. Fairley has created a collection of images, with supporting text, from World War I, the second World War, and conflicts after 1945.

The book is ordered in chronological fashion, first featured are artworks created during World War I, then followed by artwork from World War II and finally the Cold War and the Falklands War. The text that accompanies each work of art is exceptionally beautifully written, speaking about the artist and covering aspects of the conflict portrayed in the artwork.

I found that this book was ………magnetic. I found that the mental images that came to mind when reading the text were mightily enhanced by the artwork that accompanied story. Each day, for the duration of the time spent reading the book, the first item on each day’s agenda was to read 5 or 10 pages, and then to close the book to allow for some contemplation of what had just been presented by the author.

This book is highly recommended based upon the outstanding prose, spectacular artwork, and coverage of the histories of the conflicts covered.