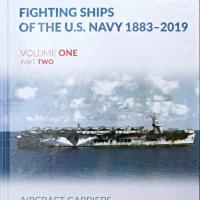 Venner Milewski, Jr., a longtime naval sailor and shipbuilder, decided to catalog all the ships used by the US Navy since 1883. This ambitious program has borne fruit in his first Volume of aircraft carriers. This review looks into the 2nd Part of Volume One – Escort Carriers. If you ever wanted a comprehensive who’s who of US Escort Carriers, with loads of photographs and camouflage patterns, this encyclopedic reference is it!

Chief Milewski, now retired, enjoyed a 32-year career in the US Navy with combat service in Vietnam, and as Chief Fire Controlman for the Tartar Missile System, Aegis SPY-1 radar and Weapons Systems. He also spent 16 years in the shipbuilding industry. Ably assisted by his son, Venner Milewski III, and wife Robin, in his goal to catalog each US Navy fighting ship since 1883, his monumental effort is taking shape and is indeed something to behold. His first issue, Fleet Aircraft Carriers, Volume One Part One, is already out and reviewed well by Dave Morrissette in January 2021.

Casemate Publishing offers this book distributed by MMP Books and published by Stratus Publishing. You get a hardbound book, 11 7/8 X 8 ½ inches at 272 pages, and made to last. This book is chock full of mostly excellent quality B&W photographs of all nine US escort carrier classes which were all built in WW2. Note: Independence-class CVLs, converted from cruiser hulls, were Fleet Carriers covered in Part One. Escort carriers (CVEs) were converted from and based on merchant ships. Each page has 1-3 photographs totaling 497 photos, and each camouflage scheme is illustrated for port and starboard patterns. Each photograph of each ship gives the camouflage Measure – a very handy favor. Photographs are all B&W, but the front cover is a colorized photo of CVE-29 USS Santee from September 1942 in rare Measure 17.

When WW2 started, in 1940 the US Navy planned and built a few small aircraft carriers hastily converted from merchant hulls and powerplants, similar to the original carrier, USS Langley (CV-1). At first, most were earmarked for Great Britain as part of the Lend-Lease program. Once embroiled in hostilities, the US Navy embarked on a huge construction program totaling 153 escort carriers, including those that went to Great Britain. You get to see CVE-1 to 139, and which ones were lent to the Royal Navy, and which ones were not built or converted. Note that classifying these ships went through several changes, so the Glossary is important. For this review, we will stay with the CVE designations since this was the ultimate name.

After the title pages, the Table of Contents lists:

This book is an encyclopedia of escort carriers made by the US Navy, and is not a narrative or history of the type, classes or individual ships. Just the facts, ma’am. The Class Chapters run-on to each other, so it might be helpful to check the Table of Contents or Ship Name Index to differentiate which class you are looking at – most escort carriers looked alike. Each Escort Carrier Chapter starts with the ship’s name, hull number, builder, laid down date, launch date, commissioned date in a ribbon format, followed by a paragraph on the details of each ship until it was scrapped or sunk. Each ship is illustrated by photographs. No line drawings or artwork. The photographs have captions that are like a text or narrative on each ship, and the camouflage pattern is always indicated. Conversions are mentioned in the text, and sometimes photos show the converted versions. This detailed info is exactly what modelers need to get the facts and appearances right. At the end of each Class Chapter is the Table for Class Specifications – length, beam, displacement, crew size, armament, aircraft number, speed, engines, fuel. Placing the class information at the end of each Class section was confusing at first, and with the large number of ships in some classes, the Specs can be many pages away – just be sure to go aft for the Specs on a particular ship. Alas, aircraft types were not detailed per ship or class, but the photos easily show which were on what ship when.

The Camouflage sections add to the photos and are extremely helpful for modeling any ship. For those 38 CVEs painted in 1943-45 splinter camouflage designs (Measures 32 & 33), the pattern for CVEs is shown for port and starboard sides and the flight deck. Bow, stern and bridge patterns were also illustrated. Keep in mind that these patterns were open to some interpretation from the design drawings, but photos again help to pinpoint camouflage appearances. Other Measures (mostly 21 & 22) were not illustrated because they were two-tone or monotone, and boring – seen one you’ve seen them all.

I have not seen the wealth and complexity of US Navy CVEs anywhere else. Companies making model kits need to catch up – there is a treasure trove of subjects (138 plus what-ifs too!) and many variations for each ship too, both fit, appearance and painting schemes. These numerous ships were the backbone of aircraft transport, antisubmarine groups, and invasion airpower during WW2 and mostly disposed of soon after WW2 ended. You could tell the Navy was having trouble choosing names for the later ships. Largely forgotten, they come to life in overwhelming profusion in the Part Two book.

Chief Milewski’s project to detail every US Navy warship from 1883 to 2019 or later is huge and ambitious and fills a niche that makes these Volumes the superior successor to Jane’s Ships of the World. These volumes are and will be the starting point and a primary resource for getting facts and details on every ship in the US Navy. This and other volumes deserve a place in anyone’s library that is interested in learning about and/or modeling US Navy warships. The price is worth the cost, and this is not going to be a dust-collector book. Very highly recommended for naval fans and modelers.

Thanks to IPMSUSA for the privilege of reviewing this superb reference!