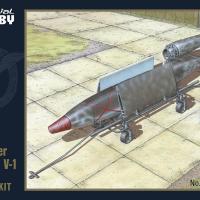 Based off of the 2018 tooling of the Fi-103, Special Hobby has recently released another kit with some welcome extras to allow the builder to display the V-1 on its handling dolly. This configuration would make for a really cool little vignette or diorama if the builder so desired. Rest assured, the kit can also be built in the flight configuration as well. J

Special Hobby has added 12 additional resin parts along with a few photoetch details. The resin parts are used to build the exposed Argus Pulsejet engine as well as one of three options for the nose of the airframe. The three nose options include a ground cover that was used to protect the nose of the aircraft, the normal nose, or what I believe to be some sort of guidance or detonation control or possibly other instrumentation mounted in the nose. As I planned to have the Fi-103 on the ground dolly I thought the cover made the most sense.

Construction is pretty straight forward. With the obvious absence of the cockpit, construction begins with the fuselage halves. As I planned to show the exposed Pulsejet engine, I sawed off the forward portion of the engine inlet. From there, I somehow managed to mis-align the two fuselage halves through no fault of the kit. I take full blame for that issue. After repairing my stupids… The next step is to assemble the pulsejet. Based on the pour stubs, I believe the resin was either directly printed or used to print the masters for traditional resin production. Either way, the parts were fantastic to work with as they fit together like a charm as well as they were in no way brittle at all easily standing up to my heavy handling without issue.

The remainder of the assembly was pretty much straight forward. The ONLY fit issues I had were with the alignment pins on the stabs. Either the pins were too large or the alignment hole on the fuselage were too small. Either way, I had to make a bit of an adjustment to get them to fit. No big deal. For what it is worth, I did do a trial fit of the wings and the same issue was there as well. The spar tube was more than a little too large to fit through the fuse and or into the wing cavities. Oh, I also tried to fit the resin engine inlet over the pulsejet. It only went on about 95% of the way. I don’t understand why, as it is molded very thin and should have fit over the pulsejet. I would suggest trial fitting the inlet over the engine, as I believe a little sanding at he aft end of the pulsejet would solve that fit issue.

With assembly complete, I primed and painted the same as any other model. The decals were very thin but manageable. I had no problems getting them to settle down with some Tamiya decal solvent. With the fuselage on the dolly sans wings, the model is just a touch tail-heavy causing the front wheels to lift slightly from the table. After placing the wings on the model, everything is right as rain. J The wings simply hang in the cradle and can be left loose or glued to the model.

Final judgement, this is a great little kit. J I would really like to thank Special Hobby for providing this great kit to the IPMS USA review corps, and to the IPMS for allowing me to review it.