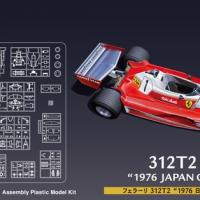 I really am an airplane modeler normally but I have not been able to resist these F-1 race car models. This time around IPMS was kind enough to allow me to build the 1976 Ferrari 312T2 of Niki Lauda. After a steady decline, Ferrari built the 312B3 in 1974 and had some success but was hampered by reliability issues. The 312T and T2 were built to address the B3s problems. Based on a flat 12 engine producing 485 HP coupled with a transverse mounted (hence T in name,) transmission the 312T was driven by Lauda to four first place finishes and the overall championship in 1975. For the 1976 season the 312T2 was introduced with Niki Lauda and Clay Regazzoni driving. The major design change for the 1976 season was the relocation of the engine air intakes to the area in front of the cockpit to comply with F-1 racing rule changes. The 1976 season was marred by a terrible crash that almost claimed Lauda's life. At the German Grand Prix in Nurburgring, Lauda's suspension failed after he contacted a curb and his car careened out of control, hit the rail and erupted into flames. Sitting in the burning car without his helmet which came off in the crash, Lauda would have died if not for the quick work of several drivers who stopped their cars and pulled him from the flaming wreckage. Amazingly just 42 days later Lauda returned to the cockpit of another Ferrari 312T2 at the Italian Grand Prix in Monza and finished forth in spite of the extensive burn wounds to his face and upper body. This model represents the 312 T2 driven by Lauda in 1976 Japanese Grand Prix, the last race of the 1976 season. The treaded tires are true to the original as the race was started in heavy rain which led Lauda to retire early for safety reasons. The 312 series was raced with great success until the 1980 season

There are 11 sprues molded in red, black, white, grey, clear and chrome. Also included are four nice treaded tires and four poly caps to allow wheel removal. Two decals sheets for the car and the tires and a single fold instruction sheet complete the package. It's all wrapped in a nice top opening box with a color illustration and photos of the finished model that I found very helpful during decaling.

As always, I gathered some research photos and found some really nice 312T2 photos on conceptcarz.com. These included a lot of nice shots with the cowl off, a feast for all those super detailers out there. I decided to build this one using only what came in the box. Steps 1-6 deal with the engine/ transmission and rear suspension assemblies. No real problems here. One feature I liked was a number sequence on the instructions that showed the order certain parts should go in. If you've ever built F-1 kits, it is easy to make connection points inaccessible if your assembly sequence is wrong. Follow the directions here, and you'll have no trouble. Another neat feature is the brake cooling ducts. On the real car these parts were unpainted fiberglass which is duplicated in clear plastic. I glued them up, cleaned up the joints and sanded them dull before airbrushing the clear yellow-orange combo in the directions. The intake pans on the engine are done the same way. The effect is pretty cool. The rest of the assembly was straight forward and having recently done another F-1 model, I was able to look ahead and paint similar assemblies all at once. The molded seat harness is a nice touch, as are the roll cages which fit perfectly and really look the part. The body panels mirror the real car in terms of joints so there are no seems to fool with.

This is a Ferrari so it's red. Well almost. The sides and lower portion of the top cowl are red. The top is painted white and this is where I had to look closer. Hasegawa was kind enough to mould a fine line where the red and white break so its easy to mask. You have to make a decision in front of the cockpit opening and around the engine air intakes. Decals are provided if you want to paint it white or red. I chose to paint it white but regretted that for reasons I'll explain in a bit. For paint, I used my favorite Tamiya spray cans of Italian red, pure white and flat black. The body parts required a little sanding before the paint as the surface had some marks in the plastic that would reflect through. I did not primer but instead shot a color coat sanded and repeat. For the final finish I rubbed the paint out with car wax after testing to make sure it did not take it off.

Next, the decals were applied in the normal way. You get decals for Lauda's or Clay's car. I found they worked well with cold water and no setting solution. As for the color issue I previously mentioned, the area around the engine air intakes in front of the driver have some complicated red on white patterns. I used a shade of red that did not match the red decals in these areas. This is really apparent over the white background I put them on. In retrospect I would have painted those areas red and used the decals provided to finish it off. There are a number of thin pin stripes that would drive you nuts if you put them on in one piece. I cut the larger ones into manageable sections. My only decal issue was the race number on cowling which allowed the backing color to show through. Perhaps another plain white decal to back it up would be in order. From there, the body panels are attached as well as the front and rear wings. These are chrome plated affairs which are a bit bright for my taste but I did not feel like removing the plating and refinishing them so that's what you see. The wheels push on over poly caps. Pay attention to the tread direction in the instruction sheet.

Wow, another really nice Ferrari F-1 model for my growing collection. Like the Fujimi kit I recently finished, a moderate level of modeling skill is needed to construct this kit. The fit of everything was right on and it looks like the pictures of the real thing down to the last detail. My favorite part of this build was learning about the drivers, history and comparing the leaps in technology from this car in 1976 to the 1980 and 2004 Ferraris I have on the shelf. I found a lot of video of Lauda's crash in Germany and the rainy start in Japan on youtube.

Thanks to Dragon Models USA for supplying the kit and to IPMS for allowing me to build it for you.