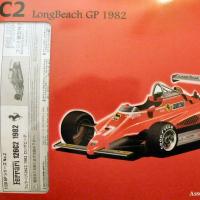 This kit is Fujimi's second 1:20 scale Formula One Grand Prix racer. Their first was also a Ferrari 126C2 but from a different race in 1982. This particular car ran at the U.S. Grand Prix held at Long Beach, CA. The thing that makes this car different is the rear wing.

The G.P. at Long Beach required a high down force wing for the street circuit. The rules at the time stated that any piece of bodywork (wings included) behind the rear axle could be a maximum of 110cm wide but did not specify that this be measured from the center of the car, so Ferrari fitted two individual wings, one slightly ahead of the other, each 110cm. In the race Gilles Villenueve finished 3rd on the road but the race stewards later declared that this wing was illegal and the results didn't stand.

At first look, I was very impressed with the detail of the parts and the vast number of them. This looks like it will be an easy build. The instructions are very well illustrated and numbered so I don't foresee any problems with any part of the build. The decals are very sharp and crisp and include all the markings that were on the real car.

The body is molded in the proper Ferrari red for that period. (We must remember that Ferrari has a habit of changing their red periodically). This is nice for the beginner if he/she doesn't wish to match the correct red. Most of the parts are molded in black but will require repainting a matt black when assembled.

If I had any complaints on this first look I would say that the windscreen is a little too thick in scale and the major flaw is the chrome plating of the front and rear wings. These were aluminum. Chrome is just too bright. My suggestions would be to re-spray them with Alclad Aluminum.

Well, this is just my first look. I will be getting to build it real soon and I'll be posting the progress as I do.

I hope Fujimi releases more 1:20 scale F.1 racers especially some of the classics.

Thanks to IPMS/USA and Dragon Models USA for supplying me this kit to review and special thanks to Fujimi for it also.