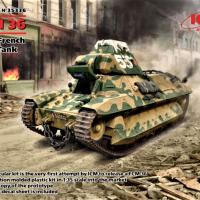 I’ll be honest. When I first saw pictures of this upcoming kit I assumed it was some kind of prototype. Every other French tank of the period that I’m familiar with – the Renaults, Hotchkisses, Somuas and Chars – all have a fairly consistent look to them, mainly because large castings were prevalent is each design, sometimes with a little bolting. This one is so radically different that it really threw me. But not only is this definitely a French design, but it is also NOT a prototype. A surprising number of these were actually built and saw combat.

There’s a fascinating story to this vehicle. Designed by the same team that built the massive Char 2C tanks in the 1920s, this one was engineered to take advantage of the electro-welding capabilities of the Forges et Chantiers de la Méditerranée located on the wharf area of Toulon. Although using a somewhat more expensive manufacturing technique than that used by the Renault and Hotchkiss light tanks, it was pursued because of the development potential inherent in the design. In any case, 100 of these were made before FCM baulked at the price they’d quoted, arguing that they were losing money on the project. Nonetheless, the initial order was delivered in February of 1939 and quickly incorporated into existing Army units.

A combined unit with these vehicles and some R35s were in position on May 1940 when the Wehrmacht established a bridgehead over the Meuse at Sedan. The FCMs proved almost impervious to the Panzer III 37mm guns, but ironically, their own short 37mm had little effect on the German armor as well, which meant that the French and German units often hammered it out at ridiculously short ranges. Ultimately, the FCM was the loser in this slug-fest, as the welded armor proved vulnerable to hits along the seams, especially on the turret. Twenty-six of the 36 units deployed were destroyed in just a few hours. In the end, the survivors were used mainly to cover the French Army retreat, most succumbing to the overwhelming weight of the German advance.

ICM’s model of the FCM 36 is the first kit of this fascinating vehicle in 1/35th scale that I’m aware of, and displays ICM’s usual attention to quality and detail. It includes vinyl tracks and although I’m not a bit fan of these, I certainly understand their logic as the real tracks were composed of VERY small links, which would have made for a much costlier kit if they had attempted these in plastic. On the other hand, they have provided tow chains made of individual styrene links which connect together to form short chains – something I’ve never seen before. Go figure.

Work begins in typical fashion, with assembly of the lower main hull and suspension. The running gear consists of mostly little wheels, which need to be paired before bringing the bogies together. There are no alignment pins on these, so this is strictly eyeball work. This general part of the assembly is a little more confusing than normal, not from any shortcoming in the directions, but simply because the structure itself is atypical. Take your time and you should have no serious problem with this stage.

The tracks consist of two vinyl lengths per side, locking together with extremely small pins and sockets. Frankly, I could never get the pins through the sockets, so simply bulldozed through this section with a hot knife, essentially welding it all together. If placed properly, one of these welds will be hidden in the upper reaches of the suspension and the other underneath the hull. Each track assembly proved to be a bit long, and if doing again I’d probably take off about 1/8th of an inch on each side, but little is seen on final assembly so you really don’t have to bother with this.

Putting the upper hull onto the lower hull proved to be more of a challenge, however, as the upper hull molding was warped out on both sides, forcing me to glue the front and back areas first, and then gradually force down each portion onto the seam. Even with patience this didn’t completely work out, and I needed to do a little putty work to get everything smooth and even. All of the mounting surfaces are essentially miter angles, so it doesn’t offer a lot of surface to fit it all together. Take your time.

The next stage was detailing out the hull, and here I found one of the few actual mistakes I’ve ever encountered on an ICM kit. There are a set of tools that mount on the right side, and although the shovel was appropriate for the scale, the pick and sledge hammer seemed ridiculously underscale. Checking online proved this to be the case, so these were both replaced by suitable material from the spares box. I also made a substitute for the rolled tarp on the right side of the hull – not because there was anything inherently wrong with the kit part, but simply for a bit more detail. As a last touch, I used some cheap chain in my supply box rather than go through the fiddly process of creating chains link by link as in the kit.

In the turret area, I found the armament assembly to be a bit fiddly, especially as the mounting parts aren’t supposed to sit flush up against the gun assembly. If I were doing this again, I’d glue one of the mounts on the turret bottom and let it dry thoroughly before installing the rest of the assembly. Also, care has to be taken with the extremely finely molded MG barrel, which broke on mine innumerable times. However, once the two halves of the turret are put together, the rest is comparatively easy. Important note, however – the part numbers for the open versus closed hatch hinges are reversed. You might want to test fit your selected hinge to the turret first just to ensure you have the one you want.

Painting was entertaining, as the box art version is certainly distinctive. It was an enjoyable exercise, and the decals (despite my initial concerns) turned out to fit beautifully with just a dab of Micro-Sol, even over the large details of the turret. A tanker from the new ICM French Tanker set obviously was made for this tank, as it also fit quite well as a test subject.

And that’s about it. The final result is a radically different – one might even say futuristic – looking French light tank. This is a relatively easy build and makes for a distinctive addition to any WW2 French tank collection. Wonderful! Recommended with no reservations.

My thanks to ICM for their continued dedication to the hobby and to IPMS/USA for their faith is letting me work on this lovely little machine. Be safe, and happy modeling!