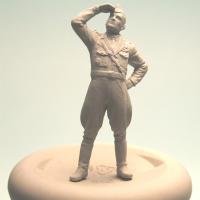 If you haven’t heard of Master Box Ltd yet, you soon will. They’re a relatively new company from the Ukraine, specializing 1/35th scale plastic figures. Although they’re young, they certainly have made a splash.

This release is their first entry into the 1/32nd scale market and it encompasses 6 of the most famous Allied and Axis aces of WW II;

The box contains a single sprue of 49 sand-colored polystyrene parts. My sample was flash free. I suspect MB is using the same plastic supplier as their fellow Ukrainians, ICM, since it seems to be a exact match with some offerings from ICM I have. You get an 8 page English-German booklet, with a detailed biography for each of the pilots.

The assembly and painting guide are on the back of the box (just like a Dragon kit). However (unlike a Dragon release), it utilizes photos of the actual assembled and painted figures, but there are no color references. In fact, the colors used on the figures on the back appear woefully inaccurate when compared with the colors on the box art.

OK let’s see what we get when we put one together. I started with Albert Marcel.

The detail level is very good with all uniform accents clearly distinguishable. After clean-up with some Simple Green, I assembled the 5 pieces without any issues. I did some seam scraping, but nothing out of the usual parameters. A little Tamiya putty along the arms, the waist, the neck, some light sanding, another wash, and it was ready for primer.

Overall, all the figures are excellent, in scale, have correct equipment, and some have nice options, especially the optional head for the Saburo Saki. However, I don’t think Dick Bong wore his leather flight jacket very often as he island hopped across the Pacific. There was one major disappointment for me; where was Jonny Johnson’s Black Lab? I know it’s a trivial thing but it could have made for some great diorama possibilities with the new 1/32 Tamiya Spitfire Mk IX.