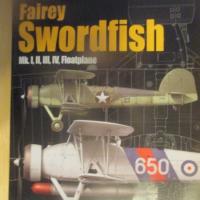 The Fairey Swordfish was an aircraft that, although appearing to be obsolete at the outbreak of World War II, achieved a combat record far in excess of what anyone expected. A large biplane, the type was used as a torpedo bomber, reconnaissance aircraft, anti-submarine type, and trainer by Commonwealth air forces and navies. Later versions were equipped with floats for catapult launching from warships, and the type routinely operated from Royal Navy carriers. In 1943, the type was equipped with radar, and mounted rockets under the wings for use against enemy warships and submarines. As long as they operated in areas where few enemy fighters were present, they could be very effective.

The book provides a set of drawings for all of the major versions of the Swordfish, ranging from Mk. I through Mk. IV plus the floatplane versions. There is no text explaining the features, but the drawings tell the story. The drawings show both side views, front view, upper and lower views, and views with the wings folded. There is a lot of information here for the modeler, and the drawings are provided in two scales.

In addition, there are ten color side views of various Mk. I and Mk. II aircraft in various color schemes, representing the major marking varieties used on this aircraft during its combat career. Unfortunately, these are only side views, and the plan view camouflage patterns are not given, although this information is available in other publications.

A major problem with this publication is that the majority of the views of the aircraft are listed as being in 1/72 scale. The two extra sheets include 1/48 scale drawings. When I first looked through the book, it seemed that the views were large for that scale, and after measuring, I found that the scale was somewhat larger than 1/72, and when I placed a 1/72 scale Matchbox model of the Swordfish over the drawing, the model was somewhat smaller. This would only be a problem in determining the size of the interior details, and model scales tend to be quite consistent. Other than that, it is an excellent publication, and provides all the information you would need for doing a super-detailed Swordfish model in either 1/72 of 1/48 scale.

As far as dimensions go, here is some information: (Dimensions are approximate)

So, in effect, the drawings in the book are slightly larger than stated scale. However, they are highly detailed, and would be very useful to someone wanting to model this aircraft in either of these scales.

Aside from the scale problem, this will be a very useful publication for any serious modeler. Recommended with reservations. Perhaps a second edition would solve this problem.