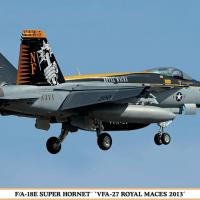 Hasegawa continues its releases of the F/A-18 Super Hornet series with a limited edition set for VFA-27 the "Royal Maces 2013", who are part of CVW-5 aboard the USS George Washington. The basic kit components have remained the same since 2006 when this series was released and IPMS/USA has been lucky enough to review the kit several times. That being said, this is a superb kit that makes an excellent representation of the Navy's newest workhorse. I did add one thing to it - TwoMikes resin intakes. I know TwoMikes is on a hiatus at the moment but their intakes are mandatory for this kit. They are white, fit perfectly and they are visible.

The kit includes nine sprues of perfect gray plastic, two sprues of clear parts and one sprue of poly caps. The kit has the option for folding the wings and includes drop tanks but no weapons for the pylons. An ATFLIR pod is included but nothing for the 11 hard points.

A large decal sheet is included and has two options. First, the color scheme is totally done in decals so you can paint the jet in its normal gray colors and then apply decals. A second option is offered to paint the black colors on and decals provide the edging and the other markings. This is an excellent option.

With this kit being reviewed before, I will concentrate on the highlights of the build and then the markings. The kit cockpit is simplified with decals being used for the sidewalls and instrument panel. There are several resin sets for the kit cockpit if you want to add that extra. There are several extra sets of lines that need rescribing and others filled and sanded. Another note is to take your time and make sure things are aligned with the nose and fuselage, as they are multi-part. The TwoMikes intakes are white resin drop-ins so you paint the kit intake, then glue in the white resin, add the engine fronts and it looks perfect. The landing gear and doors are well detailed and were added later. The kit canopy can be posed open or closed.

Once the parts were prepared, the kit was painted with light ghost gray bottom and dark ghost gray top. These were painted with no issues. The wheel wells were painted white and the time came for decals. I started decaling by doing the landing gear. The main gear has three decals on it. The decals were thick and I could not get them to wrap around the gear - I tried Mr. Mark, Solvaset, Microsol system and even hot water- no luck. These were discarded and I used an old Reheat set, which settled immediately.

Adding the decals to the rest of the kit was an exercise in patience. The decals are thick and difficult to conform. To get them to work, I added one and let it dry while bathing it repeatedly in Mr. Mark Softer and Solvaset. If you let it sit overnight, it will snuggle down but just barely. This is a slow process considering the amount of decals required to conform. The spine alone takes six large decals. It took almost three days to complete them as well as the tail and horizontal stabs. On top of this are all the stenciling, and general markings. In the end, the decals worked but they were a real struggle to get to conform and the smaller ones like the ones for the landing gear would not conform.

Once the flat coat was applied, I used pastels for the staining and panel lines, but very lightly. The real aircraft was clean. Once I flat coated it again, I attached the landing gear doors, the pylons, the landing gear and the canopies. That left one thing - weapons. Like most Hasegawa kits, the kit has no weapons and eleven open stations. I filled both inboard and the centerline with tanks with the appropriate decals. I used two different Hasegawa weapons sets to add two GBU's, two AIM-9 Sidewinders and two Mk. 82 bombs. In looking at real load-outs this isn't real, but I wanted to have a nice symmetrical load.

This is a nice kit and builds into an excellent kit of the real thing. I would recommend it to experienced modelers due to the decals. It could be recommended to anyone interested in the kit if other decals are used The lack of weapons is also tough as it adds additional cost to the kit. Recommended with the above observations.

My thanks to the great people at Hobbico for the review kit and to IPMS for the chance to review it.