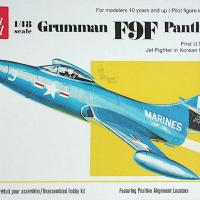 I won't go into the background of the F9F Panther, mainly because I don't know a lot about it and I know there are those out there who, knowing every nut, bolt and hydraulic coupling, would let me know in no uncertain terms if I were to err. Instead, I'll confine myself to the kit itself. Round 2 Models is a collectibles company located in South Bend, Indiana, that has acquired, among other lines, plastic kits from AMT, MPC, and Polar Lights, and they re-release selected out-of-production subjects from these companies' lines. Interestingly, they put out their releases in the old companies' packaging with no indication that it's from Round 2. If you didn't know any better, you'd think it was 20-30 years ago. The only clue you get is a Round 2 flyer/catalogue that is included in the box. Currently, their offerings are weighted toward automotive and Star Trek subjects, but they do have a couple of aircraft, one of which is the old AMT F9F-2 Panther. It goes without saying that this is not a state of the art kit, but it is not meant to be one. It is meant to evoke the nostalgia of sitting down and putting together a plastic model back in the day, and it succeeds admirably.

The kit consists of the usual fuselage and wing halves, and two sprues of smaller parts such as landing gear legs, a cockpit tub, and a pilot figure. In a separate part of the parts bag is the clear one-piece canopy. The molding is amazingly crisp with very little flash with no sinkholes, no ejection pin marks that show, and the canopy was crystal clear and nicely molded. Round 2 must have spent some time cleaning up these molds, as they say the kit has not been in production for 30 years and that's got to take a toll on the molds.

The interior consists of a cockpit tub with a molded-in sort-of seat thing, and molded-on console and instrument panel detail, which is odd because they give you a nice control panel decal that does not align with the molded-in detail at all. As this is a "for fun" project, save the decal for the spares box and just dry brush the existing molded-in instruments. You won't see much when the canopy is in place, anyway. The only other interior part is the nose gear wheel well floor...no walls, just a floor to mount the gear leg. And the wheel wells in the wings are molded in, so there are no extra parts there. Fit overall is not bad, considering the age of the thing. Gap filling super glue and a little putty here and there took care of most problems. The largest gap was the wing-to-fuselage joints. Make sure of the fit before you glue everything in place to minimize the shims and/or putty you'll need, because you will need some. The pilot figure is nicely molded and, when painted, looks good under that large, clear, domed canopy. The panel lines are raised and are a bit high, so I sanded them all off. Again, as this was a nostalgia build, I didn't bother scribing them back in.

There are four possible markings schemes, including one for the Blue Angels. All of them, however, are pretty basic, as they are all overall dark sea blue, a scheme which lends itself to being rattle can spray painted. Only the details vary between the different aircraft, and the decal sheet has these and brightens things up quite a bit. They went on well and snuggled down with some decal setting solution. One hint, however – the yellow-and-stars rudder decal that I used is notched to fit around the elevators. This could make it pretty tricky to apply. I just snipped the decal in two at its narrowest point and applied the two halves separately. That made them much easier to control.

This would be a great kit for that modeler who's done with snap-fit kits and wants to try something a little more ambitious. There are not many parts, not much clean up is needed, and everything goes together simply and easily. The paint schemes are basic and the decals work well to dress up the kit. For a father-son/daughter project on a rainy day, this kit would be perfect as you could teach more advanced modeling skills on a simple kit that produces nice results, or you could just have a guilty pleasure weekend project for yourself like I did.

Thanks to Round 2 for providing the review sample and to IPMS/USA for a chance to stroll down memory lane with this kit.

Round 2 catalog
Previous Next