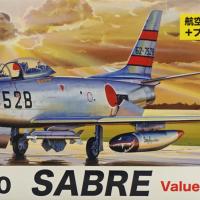 This was my first Fujimi build and I think I picked a good one to start with. I don’t often build jets but I’ve always liked the Saber so I grabbed this from the reviewer corps list. This kit or more specifically this mold has been around since ~1986. For a mold of this age it is in terrific shape and I only spotted a tiny bit of flash on one part. Panel line detail is very good with only a few of the access panel lines needing the attention of your favorite scriber. The kit box makes mention of this being a Value set. From what I gleamed on the Fujimi website, the Value is the fact the kit includes the JASDF “Blue Impulse” decals along with the standard decals.

Over all the build is very straight forward. It is no big surprise that you start with the cockpit. Although there is some generic detail on the instrument panel and side instrument panels, Fujimi provides decals for each of the three panels. The cockpit is incorporated with the top half of the intake duct and the nose gear well is incorporated into the lower intake duct. I don’t see this as a big deal other than the fact both the joystick and nose gear leg attach directly to the duct and a hole(s) protrude directly through the respective duct part. If you want to leave the inlet covers off, you will have to deal with the holes ahead of time or risk seeing them through the nose. It is easy to fix the joystick before assembling the ducts, but the nose wheel makes a bit trickier. I chose to fill the hole for the nose gear and then butt glue the leg onto the wheel well.

I had very few problems with the initial assembly and in hind sight, I would suggest that you leave the pilots seat out of the cockpit until the end of the build. That will make the masking off the cockpit much easier to accomplish. As far as filler goes, I used a little bit on the lower fuse where the wing joins with the fuse. I was able to get the joints close but some filler was needed. Fit was good for a kit of this age and I was impressed that the air brakes even fit well into the fuselage sides. It is just as easy to display the brakes open as closed. By the time I painted the model, it dawned on me that I forgot to sneak some lead into the nose. The quick and easy fix was to put some lead in the intake duct and then install the duct cover. (And that is what I did.)

One of fellow Wright Field modelers suggested to use a lot of heat with the Fujimi decals. Normally I do that anyways and I had no problem putting down the decals. I place my decal water in a small ceramic bowl that sits on top of a candle / mug warmer. Fujimi includes quite a few decals for this model in the way of the extraneous markings. They also include individual numbers so you could choose to model any of the aircraft in the squadrons included in this set. Again, the only issue with the decals were from builder’s error. I forgot to install the red stripe around the fuse that should have been placed prior to the fuselage Hinomaru decal. The decals did need a bit of attention with some Micro-sol and they settled into the panel lines just fine.

So, what did I think of the kit… To answer that I will tell you that I have on order the RF-86 version of this kit. The only addition I will make to that kit is to pick up the Eduard P.E. set for the cockpit as it is just a bit on the sparse side for my tastes.

I want to thank Fujimi, Dragon Models USA and the IPMS USA for the chance to review this kit.