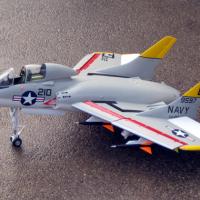 Well, shiver my swashes and buckle my timbers…at last. The finishing touches have been applied to this magnificent beastie! The stance of the aircraft can be referred to as a cross between a praying mantis and a Great Dane passing a peachpit. In any case, this has to be one of the most unique carrier aircraft ever produced. Although not the most popular among pilots, I recall reading a pilot report in Tail Hook magazine where comments ranged from concern over a hard landing which would drive the nose gear up through the cockpit floor “doing horrible things to the pilot” to attempts to keep the fuel load in trim being much akin to “sitting on a basketball.” Oh, well, I digress, so on to the build.

As with all of Paul’s previous kit releases, they include a complete set of instructions including step by step photos of the assembly which, if followed, will result in total satisfaction of the finished product. After a complete scrubbing with Wesley’s “Bleche White”, (a whitewall tire cleaner) to remove all mold release oil residue, construction begins with the two solid wings and the center support section. Photos show the necessity of plastic shims to make more solid the join of all parts. This is most necessary in that, when completed, this is one heavy puppy! In fact, my left bicep is now ¾” larger than the right from having had to pick the thing up constantly. After test fitting the wing assembly to get it as close as possible, the fit of the fuselage bottom may be less than ideal. Pics show the addition of a piece of heavy plastic card “spreader” piece to improve the wing root fit and to minimize the amount of filler putty used. Two things here…First, there is NO dihedral in these wings. They are perfectly flat across, and Second, when applying filler to any root gaps, they are NOT filleted. There is to be a 90 degree angle at the wing and fuselage join, so don’t overdo it with the putty here. In point of fact, very little putty was used in the construction of this model, not dissimilar to his previous releases. It should be stated here that this is a much more complex kit than the previous kits. I am constantly amazed by the extremely high standards of his quality control. The only word to describe this kit overall is “outstanding”.

Once the wing has been fitted to the top aft section of the fuselage, adjustments will need to be made on the spreader bar for the bottom half, again to minimize putty application. At this point, the intakes will also take some tweaking with sheet styrene for a perfect fit. The gun troughs need to be drilled out. (There are two muzzle blast baffles for each gun trough to be installed that are almost microscopic, so they were saved for dead last.)

Once the aft fuselage section and the wings have been successfully mated, the forward section is attached, beginning with the cockpit tub. This area just oozes detail. The instrument panel is a “sandwich” type affair that necessitates adding each instrument face individually. I chose to use some of the Mike Grant instruments and they worked out well, but you can also use the “punch out” dials supplied on the plans. Either will look very well when completed. The stick and rudder pedals are cast separately and are absolutely gorgeous. The “bang” seat is beautiful and is further enhanced by the photoetch seat belts, stirrups and side bracing. I would recommend that the seat be built, painted and set aside for final assembly. At this point, the tub and nose wheel well can be installed. Some trimming was necessary at the back corners of the wheel well. The fitting of the nose section to the aft portion proved to be a tribute to the old adage “test fit, trim, test fit, trim, etc”. This portion can make or break the final appearance of the aircraft. I found that in all areas, the more I trimmed, the more the need for putty was lessened. The pictures will tell the story far better than I can, but once these two main sections are mated, the balance of the construction is textbook simple. Some time ago, I acquired one of the adjustable 3 legged stands and, in this case, as the images show, it got a good workout. The installation of the fins and main wheels were a perfect fit which went with my feelings re: the kit in general.

Next came the cleanup and installation of the leading edge slat arms. Use caution here, for they can be easily broken off through mishandling (I know, I did it twice!). As for the slats themselves, be careful sanding them because they are nearly paper thin at the trailing edge. Speaking of the trailing edges, the elevons use the provided photo etched trailing edges that look much like a rain gutter with drain holes. Truly unusual, but again, unique. The inboard trailing edges consist of 4 large speed boards, beautifully cast and painted red inside, which made the decision to leave them partially open an easy one.

Images show the landing light opening in one of the main gear forward door covers. This was enhanced by a MB lens and some Kristal Klear to fill in the rectangular hole. The early landing gear and wheels are true works of art. Images show the multi part arrangement with wheels and tires being cast separately, making painting a breeze. The gear is lost wax casting by Ernie Fee of G-Factor and, as you can see, not much else is needed. The nose gear was cast resin with a wire center, but Paul tells me that there is only 3 ounces of stress placed on it. No nose weight was necessary and, between the beautiful castings and the resin add on pieces parts, they are a kit in and of the themselves. Same can be said for the Sparrow I missiles. Beautifully done, but I wasn’t aware they would look like they were made in Jamaica based on the colors. There is NO WAY I was going to attach something that garish to an otherwise beautiful aircraft, but do with them as you will.

Time now for paint and here are the steps I took. I began by using Alclad II grey primer with microfiller. This was applied after having wet sanded all surfaces with 600 grit dipped in a solution of Dawn detergent and water. After the primer dried (approximately 30 minutes), it was polished with MicroMesh pads until super smooth. Then a coat of Tamiya rattle can Gloss Aluminum lacquer, decanted and sprayed through an “H” model Pacesche Airbrush at 12 PSI. These lacquers dry to a perfect shine in about 45 minutes and, if the surface prep was sufficient, no polishing is necessary. This was followed by 5 different shades of Alclad II and the pattern for the color demarcation is provided in the plans supplied in the kit. Nice touch, Paul.

Kit decals are high quality and VERY thin. They come printed on 4 sheets that include all stenciling and walkways, plus options for markings of four different aircraft:

Being me, I have always wanted to do something different, I contacted my “go to guy” Keith Davidson of Red Pegasus Decals for the custom work depicted here. The Squadron chosen was VA-12 (“The Flying Ubangis”) from 1955 and thoroughly depicted in Steve Ginters Cutlass book. Red Pegasus decals are very thin as well as were the kit supplied ones. So a light solution of Dawn detergent in water was applied prior to placement to make easy the positioning without tearing them. Once decaled, the aircraft was placed up on its landing gear, so I could put the 3 legged stand aside for the next project.

Standing on its own, time to add all the small pieces parts that remain, such as the barrier deflector (notice the offset to port), fuel dumps, rudder hinges and, very last, the seat and tailpipes. Reason for this is if you don’t leave them open, you have no way to pick up the model without breaking something off. And that, folks, is pretty much the conclusion of one of the most beautiful as well as complex resin kits I have ever encountered. While not for beginners, anyone with some resin experience should be able to complete this kit without issue by simply following the directions. The images speak for themselves. The final result is a replica of one of the most unusual, highly controversial (ask one of the Blue Angels who flew them for a short time), strangely beautiful carrier aircraft ever produced.

Just a word here re: pricing. If you build large scale aircraft and in particular the Cutlass, and place any value on what your time is worth, this kit, as far as I’m concerned, is a real bargain. It truly needs nothing when you consider photo etch and prime quality decals are, as is everything else, included. IF you have any doubts, I will be more than happy to sell my partially built Combat vac form kit REALLY CHEAP ! The same may be said about my large scale A-10 Thunderbolt in my stash that the grand total of resin and aftermarket goodies has exceeded $ 300.00, NOT including the price of the kit itself. So, “Butch up, Mildred” and do the math! (I hope my long suffering wife is not reading this!)

In conclusion, I have no choice but to award the “Most High” approval to Fisher Model for producing one of the finest, most complete model kits ever. Thanks to Paul for the review sample, and for the many fun hours of building it represents, and to IPMS/USA for the opportunity to share this review with you.

Finished Model on Deck
Previous Next