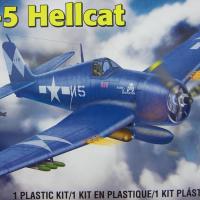 The US Navy’s mainstay fighter from 1943 until the end of World War II, the Grumman F6F Hellcat was instrumental in establishing air dominance in the Pacific theater of operations during the war. Following the war, the Hellcat was relegated to US Navy Reserve units, as newer, more capable types replaced them in fleet service.

Revell’s re-release of the timeless Monogram F6F-5, first offered in the 1960’s, is still a great kit for young modelers, or experienced modelers looking to relive a piece of their childhood. It’s probably safe to say that a majority of older modelers who started the hobby as kids have built at least 1 or 2 of these classics. Although only 6 (and ½, I’m reminded), this was Camden’s second Revellogram F6F-5, and the first one he actually painted and decaled.

Molded in light gray, the ‘Cat’s 55 parts are surprisingly crisp and sport raised detail, with a clear canopy and refreshed decals. Not to disappoint, features still include the folding wings and retractable landing gear.

Assembly is basic, with an instrument panel serving as the cockpit detail and a pilot figure which glues into the aft armored cockpit bulkhead. Now having mastered the folding wings and retractable landing gear after over a half-dozen attempts in the past 3-1/2 decades, I was able to coach eager little hands through the process with Tamiya cement, clothes pins, and a lot of patience.

With ample dry-fitting and sanding, most of the parts went together fairly cleanly, but some putty was required on the wing and fuselage seams.

Engine detail, although molded into the cowling, is crisp and pretty convincing.

Overall assembly time was only a couple of hours, but kit completion was deferred on account, to a large degree, of “Junior Modeler’s ADHD” to play with the in-progress model and other unfinished articles in his ever-growing stash. During one of the play sessions, one of the wing lock tabs broke (nothing has changed in nearly 50 years), so we glued both wings in extended configuration.

As part of his airbrush training, Camden painted the kit with Italeri Acrylic Dark Non-Specular Sea Blue and applied a couple of coats of Minwax Acrylic Gloss Clear for the decal base. Wanting a somewhat colorful marking scheme – and a model to match one of Dad’s – Camden lobbied to use one of the sets of Two Bobs decals from the 2009 IPMS/USA National Convention hosted by IMPS/Eddie Rickenbacker in Columbus. Needless to say, I succumbed to the relentless pleas, and we decided to bypass the kit decals, which look very well made.

Camden’s take on the kit is “awesome!” He particularly liked the way the cowling fit to the fuselage. Not sure why it made such an impression, but it did. He loves the working features on the old Monogram kits re-released under the Revell brand, and I love the fact that these kits are still available and affordable – and look good when built with some patience and care with only basic skills.

In conclusion, we give this legendary kit a hearty “two thumbs up” and highly recommend it for kids starting in the hobby, and for experienced modelers wanting to go a bit retro and relive their earlier days in the hobby.

Thanks to Revell for the sample kit and to IPMS/USA for the chance to review it.